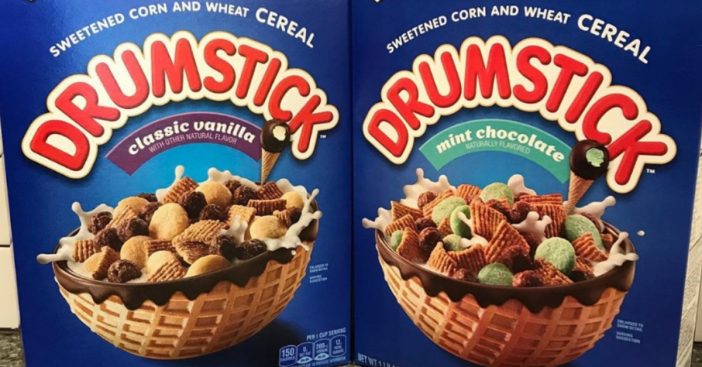 There is a new sugary cereal in town from General Mills. Likely very bad for you, but very delicious, General Mills announced Drumstick cereal based on those Drumstick ice cream cones! The popular vanilla Drumstick is a cone of vanilla ice cream that is coated with chocolate and roasted peanuts.

It is a summer staple for many and Drumstick has come out with many different flavors over the years, including Kit Kat! Many people love that little bit of chocolate that is at the bottom of the cone. There is already chocolate chip cookie cereal, so no surprise that ice cream cone cereal has come along.

You can buy two flavors of Drumstick cereal in stores now

A Walmart in Cincinnati posted a photo of an employee holding both versions of the cereal. You can purchase The Drumstick Classic Vanilla and Mint Chocolate flavors. They are reportedly made from sweetened corn and wheat cereal. Would you want to try the classic vanilla or the mint chocolate flavor?

The Drumstick cereals have also been seen at a Walmart in South Carolina, so it seems they are spreading around the country. No word on if these cereals are only available at Walmart or not. There are no results by searching Drumstick on General Mill’s website, so these cereals are pretty new!

The original Drumstick ice cream cones were invented in 1928, but the kind you know and love have been owned by Nestle since 1991. In the United States, some of the flavors that have been available are caramel and fudge-filled cones, Mint Chocolate Crunch, Cookies and Cream Crunch, and simply dipped, cones filled with caramel, chocolate, and plain vanilla.

According to Wikipedia, “The ice cream cone concept originated at the 1904 World’s Fair in St. Louis, Missouri. An ice cream maker at the fair discovered that he ran out of bowls to serve ice cream. He still had ice cream to sell, so he asked a waffle vendor to roll some waffles into cones for his ice cream. His ice cream sold and it became a finger food. In 1928, the Parker Brothers, Bruce, I.C., and J.T., added to the invention by adding a chocolate coating with nuts to it. One of the brothers’ wives said that this invention looked like a chicken leg, commonly nicknamed a drumstick in the US.”

Have you seen these cereals in stores or tried them? If you’ve tried them, we want to know how they taste! They sound delicious, especially if you love Drumsticks and could eat them at any time of day.