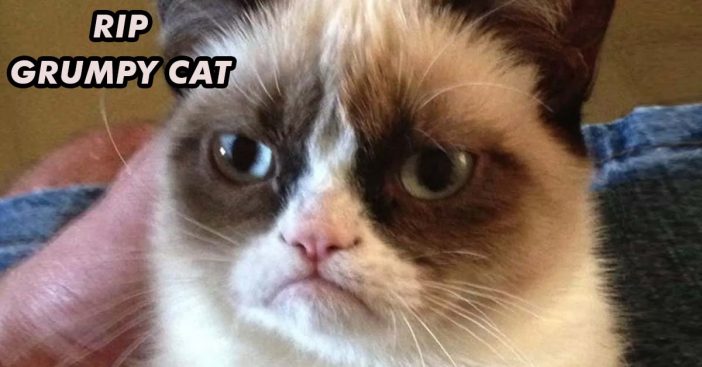 It has sadly been reported that the cat responsible for making the “Grumpy Cat” photo famous for several years, has died at the age of 7. Grumpy Cat, whose real name was Tardar Sauce, became famous for sporting a hilarious scowl on her face at all times and her photo eventually became famous on the Internet.

She became so famous that even big celebrities began posing for photos with her such as Stan Lee and characters such as Oscar the Grouch Sesame Street. The official Facebook page released a statement this morning confirming the news.

“We are unimaginably heartbroken to announce the loss of our beloved Grumpy Cat,” the official statement read, “Despite care from top professionals, as well as from her very loving family, Grumpy encountered complications from a recent urinary tract infection that unfortunately became too tough for her to overcome. She passed away peacefully on the morning of Tuesday, May 14, at home in the arms of her mommy, Tabatha.”

“Besides being our baby and a cherished member of the family, Grumpy Cat has helped millions of people smile all around the world—even when times were tough. Her spirit will continue to live on through her fans everywhere.”

Many fans have been giving an outpouring of love for the cat since the news of her death. One fan said, “I loved this cat. I had the absolute pleasure of meeting her once and I will never forget it. I will never forget the first time I saw her face! I learned much from her and am deeply saddened and devastated to hear of her passing.”

Another humorously said, “RIP to grumpy cat, she was a beautiful reminder that even if you work every day for the rest of your life you will never have as much money as a cat with a funny face.”

RIP grumpy cat. i just hope you and stan lee will meet again in the afterlife and do grumpy faces again together 😢 pic.twitter.com/y9Wm0unDpP

Do you remember when she posed with the late Marvel legend, Stan Lee? Within hours of the announcement of her death, the cat was a trending name worldwide yet again as many fans remember the laughs they received from all of her hilarious photos.

The last time she made headlines was in 2018 when she won a copyright trademark infringement court case. She was awarded $710,000 in a case against a company that made a Grumpy Cat Grumppuccino. That actually sounds like it would be pretty great for animals!

Please SHARE this article to remember Grumpy Cat! We hope she’s loving her time up in kitty heaven.

Check out this hilarious video below with Oscar the Grouch from Sesame Street with our favorite, grumpiest cat:

Previous article: A Farrah Fawcett Special Explores Romance With Ryan O’Neal Ten Years After Death
Next Post: ‘The Big Bang Theory’ Ends After Being On TV For Over A Decade