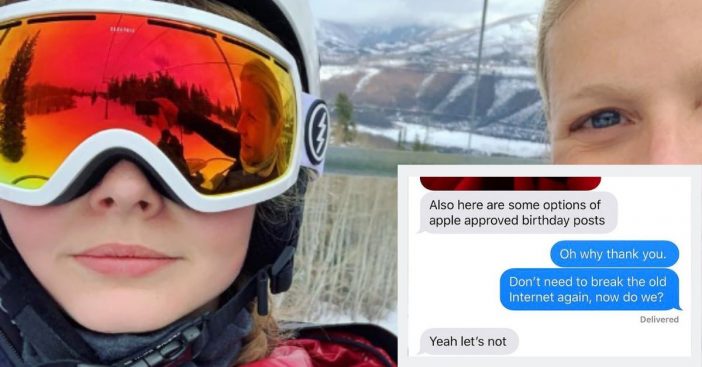 Gwyneth Paltrow and her 15-year-old daughter, Apple, have found themselves in the middle of a privacy debate that their entire fan following is also participating in. Paltrow shared a photo of herself and her daughter during a skiing trip to her Instagram when Apple’s comment on the photo caused everyone else to erupt.

Her daughter was quick to call out her mom in the comments section, saying that her mom posted the photo without her daughter’s consent. Paltrow defended herself by saying her face wasn’t even visible in the photo.

“Mom, we have discussed this. You may not post anything without my consent,” Apple said in the comments, although the original comment seems to have been deleted.

Some other fans have responded in the opposite way, encouraging Apple to not care so much as her mother is just posting about her because she’s proud.

New screenshots have surfaced showing text messages between Paltrow and her daughter. The messages detail “Apple approved” photos that her mom was allowed to post for her 15th birthday. The messages show Apple saying, “Also here are some options of Apple approved birthday posts,” to which her mother responds, “Oh why thank you. Don’t need to break the old Internet again, now do we?”

Her daughter responded, “Yeah let’s not.”

The screenshots were part of the birthday collage that Paltrow posted for her daughter just a day ago. We’re guessing this was a way to tell the public that, yes, this birthday photo of her daughter was Apple-approved and her daughter did indeed give consent to posting it! No one seemed to be too focus on that, though, and all were wishing Apple a very happy birthday.

“Happy 15th birthday my angel @applemartin I will never be able to put into words how much I love you. You are so strong and so good and so damn funny and sooooo gorgeous inside and out. I am the proudest mama ever,” Paltrow posted.

What do you think of this interesting privacy debate? Be sure to SHARE this article with your thoughts!

Check out the full coverage for this story in the TMZ video below: