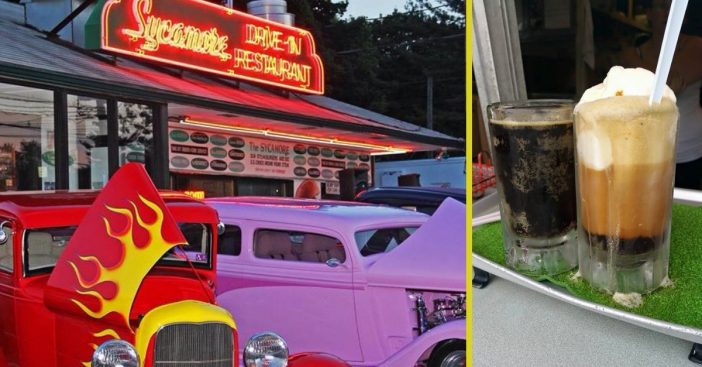 Drive-ins were popular restaurants in the ’50s and ’60s, and now the nostalgic love of these drive-ins remains. While many have since been closed, there are still plenty in the United States! You probably know about Sonic, the chain of drive-ins, but there are lots of others to explore.

Not only just a place to get some delicious food and drinks, drive-ins really serve up that nostalgia of the good old days. Here are some drive-ins that you can still visit around the country. This sounds like a really amazing road trip, who’s in?

This drive-in opened in 1956 and remains open, serving their trademark root beer and Zip Burgers! Their prices are low too with burgers only $2.15 and onion rings $1.75. Their root beer is homemade and served in those old-fashioned frosted mugs.

And before we move on, let’s dive in to the delicious… ROOT BEER FLOAT:

This drive-in was opened in 1964 and still looks basically the same! They offer delicious milkshakes (order one extra thick!), fries seasoned with “Bunny Dust”, fried chicken, pizza, ice cream, and more. You can eat in your vehicle or at the picnic tables.

3. The Varsity in Atlanta, Georgia

This drive-in has actually been around since 1928! They were originally a small hot dog stand, but have kept renovating to add more and more. The carhops still wear those vintage paper caps. They are known for their chili dogs, slaw dogs, and Frosted Orange milkshakes.

If you’re looking for the nostalgia of a drive-in mixed with incredible seafood, check out this spot in Maine. You can even get crabmeat or lobster for breakfast here! One of their signature meals is the lobster BLT.

Ardy & Ed’s has been open every summer since 1948. It was originally named Southside A & W Drive-In but changed when new owners bought the drive-in. Those sundaes look so yummy!

6. The Drive-In in Taylors Falls, Minnesota

Simply called The Drive-In, you really feel like you are back in the ’50s when you visit this place. The carhops wear poodle skirts and they offer homemade root beer, bison burgers, fries, and more. They also offer an indoor dining room that looks straight out of the ’50s too.

This is a roadside drive-in down Route 405 that has a nice river view. Their signature menu item is the fish sandwich, but they offer lots of delicious and homemade items. They use the same recipes that the founders started using in 1951.

This cool place started in 1953 in a trailer! Customers often called their burgers “some burger” so they changed their name in 1974. In addition to burgers, they also have bourbon-fried chicken, strawberry pie, and more.

9. The Chatterbox in Augusta, New Jersey

The Chatterbox offers plenty of traditional drive-in food, but they have also expanded to offer wraps and seafood. People often come in with their classic cars for the ultimate nostalgic drive-in experience.

One of the best places to visit in the big city of Chicago, Superdawg has been around for about 70 years. They have all-beef hot dogs and even a gift shop with cute stuff.

Ed Walker’s is known for their French dipped sandwiches and giant cheeseburgers! Apparently, the cheeseburger is five pounds and comes with a pie server. You can also get a beer delivered to your car.