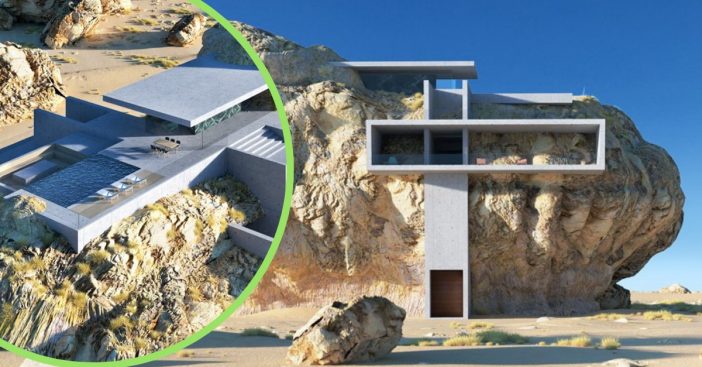 Architect Amey Kandalgaonkar wanted to create a home inside of a rock. He took inspiration from an ancient piece of architecture from Saudi Arabia’s past and created a 3D plan for building this home. The home is very geometric and has been built right into the rocks, instead of damaging or changing the huge rock structure in any way.

Located in Shanghai, China, Amey admits that this house would be very costly to build. In fact, he raised the question in an Instagram post, “Any billionaires out there interested in building this?” No word on where this home may be able to be built either. Do you think anyone would pay billions to see this house get built?

Learn more about this blueprint and see the stunning photos

The 3D images look incredibly real! They definitely fooled me for a second thinking the house had already been built! The home would have multiple levels and decks and even an infinity pool on top. You would really have to be comfortable with heights to live here.

According to Hypebeast, Amey said, “Considering the visual complexity of the rocks at Madain Saleh, it was imperative to use simple planes and cubes in order to achieve a visual balance. I started out creating the rock in 3D software which in itself was a sculpting process.”

He continues, “Later when inserting the house into this rock, I tried to keep its visual impact from eye level as minimum as possible and only when observed from a bird’s-eye view, the real extent of the intervention is revealed.”

What do you think about the plan for this house? If you had all the money you needed, would you want to build a modern home into a rock or do you think it looks terrible? Whether you would live here or not, you have to admit it looks pretty unique and interesting!

If you found this article interesting, please SHARE with your friends and family who love unique architecture and would love to see photos of this potential home inside a rock!

WATCH the video below of an actual home that was built into a rock. It cost $15 million to build this on a beach:

Previous article: Former ‘James Bond’ Star Pierce Brosnan Is A Full-Blown Silver Fox Now And He Looks Amazing
Next Post: How To Clean Your Keurig To Avoid Mold And Bacteria