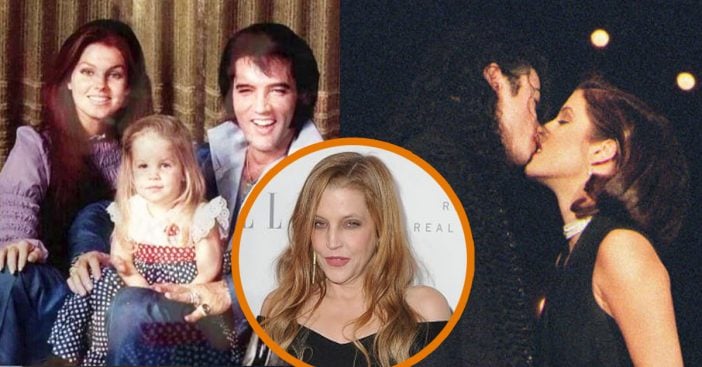 Lisa Marie Presley is the only daughter of the late Elvis Presley and Priscilla Presley. She’s come across some great success from being the daughter of the King of Rock and Roll but has accomplished a lot on her own in the music business, starting with her three solo albums that are all certified gold.

Lisa Marie, born on February 1st, 1968, is a gold-certified singer-songwriter and the sole heir to the Graceland estate. Here are some interesting facts about Lisa Marie’s life you didn’t know about!

While many news outlets only mention Lisa Marie’s two twin girls, she actually is a mother to four children. She had two children with her first husband, Danny Keough; a daughter named Riley Keough and a son named Benjamin Keough. She also had her two twin girls with her fourth husband, Michael Lockwood. The girls are named Harper Vivienne Ann and Finley Aaron Love.

2. Lisa Marie Presley was married to the late Michael Jackson

Many people know that Elvis’s daughter Lisa Marie Presley has had a string of failed relationships and marriages, and one of them includes her short marriage to Michael Jackson. They first met in 1975 when Lisa was just 7 years old and she was in attendance at one of his shows. They eventually began an adult relationship in 1992. With all the child abuse allegations against Jackson, he leaned on Lisa for support. She filed for divorce in 1996, citing irreconcilable differences.

In 2010, Lisa told Oprah Winfrey that she and Jackson continued to have an on-and-off relationship for four years following their divorce.

3. Lisa Marie released three albums that have all done well

Elvis’s daughter Lisa had a taste for music. Her solo album was To Whom It May Concern released on April 8th, 2003. Her first album did extremely well, claiming No. 5 on the Billboard 200 charts and was certified gold by June 2003. Furthermore, her second album titled Now What was released on April 5th, 2005, and claimed No. 9 on the Billboard 200 charts. This album was also certified gold by November 2005. In 2007, she released a single of “In The Ghetto” as a posthumous duet with her late father. This single claimed No. 1 on iTunes and  No. 16 on the Billboard singles chart.

4. Lisa once belonged to the Church of Scientology

However, in 2016, she defected from the Church, although both her mother and daughter (Riley Keough) remain members of the Church.

5. She had four marriages

Lisa has had four marriages and all of them have ended in separation/divorce. Her first husband was musician Danny Keough in October 1988. They soon had a quick divorce in 1994. Her second marriage was to Michael Jackson, as we know. Her third marriage was the most notable one next to Michael Jackson, and it was to actor Nicolas Cage in 2002. Cage filed for divorce after just 108 days of marriage and it was finalized in 2004.

Her fourth and most recent marriage was to guitarist Michale Lockwood in 2006. What’s shocking about this was that her first husband, Danny Keough, was actually the best man at their wedding. She filed for divorce after ten years of marriage, in 2016.

Did you know any of these facts about Lisa Marie Presley? Be sure to SHARE this article if you do!

Take a look at the video below for Lisa Marie Presley’s net worth, biography, and more:

Previous article: ‘NCIS’ Actress Talks About The Loss Of Her Husband And Her New Hobby
Next Post: Dolly Parton Releasing A New Lifestyle Brand with Clothing, Jewelry, And More