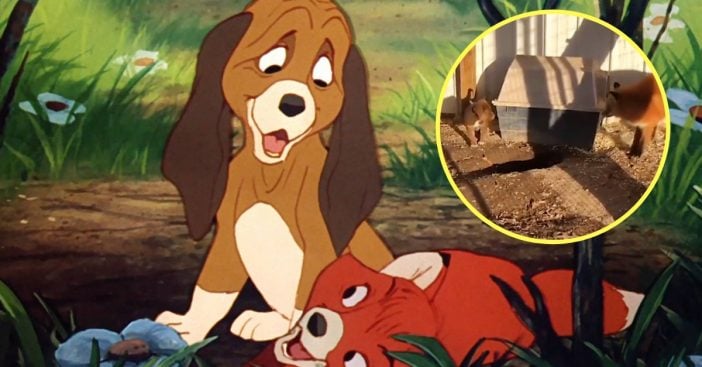 Do you love the adorable Disney movie The Fox and The Hound? If so, you are going to eat up these photos of real-life fox and hound best friends. Phoenix is a red fox and Copper is a Labrador puppy. Generally, foxes and dogs don’t mesh well, but these two love hanging out!

A video appeared showing different clips of Phoenix and Copper running around and playing together. Carrie Miller from Teutopolis, Illinois owns both Phoenix and Copper. Generally, you really shouldn’t keep a red fox as a pet, but special circumstances allow it to happen.

The owner was inspired by the Disney film

Carrie and her partner work away from the home, so they wanted Phoenix to have a friend to play with during the day. She wanted him to have some company while they weren’t at home. So, they adopted little Copper!

Carrie was actually inspired by the Disney film and named Copper after the pup in the movie! In the film, the fox is named Tod. The Fox and the Hound came out in 1981 and focused on this unlikely friendship. It is one of the most beloved Disney films from that decade.

They’re so cute together!

We just love photos and videos of animals who should be enemies, actually getting along and being best friends! It proves that anyone can get along.

According to Little Things, Carrie said, “The Fox and the Hound was a movie very dear to our hearts when our children were little. They loved the movie and I think if given the right environment and are raised together, Copper and Phoenix can be friends without knowing they were truly meant to be enemies in the wild.”

It wasn’t an immediate friendship. At first, Phoenix was pretty nervous around Copper, but they quickly became best buddies. They chase each other all day long. Carrie hopes they will continue to stay close as they both grow up.

What do you think about someone owning a red fox? Do you love these two animal buddies hanging out? If you enjoyed this article, please SHARE with your friends and family who love animals!

Check out a video of clips of Phoenix and Copper running around and playing. They are so cute together!

Previous article: David Hasselhoff Is Returning For A ‘Knight Rider’ Special — Get The Details!
Next Post: Breaking: Peter Mayhew, Chewbacca In The ‘Star Wars’ Films, Dies At Age 74