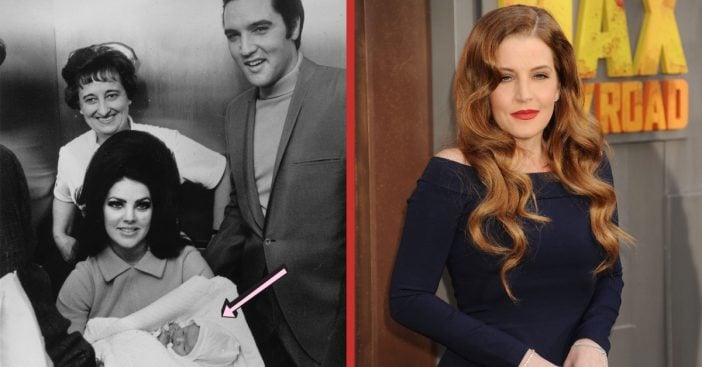 Lisa Marie Presley, who is now 51 years old, is the daughter of Elvis Presley and Priscilla Presley. However, Priscilla became a single mom in 1977 when tragedy struck the family (and the entire nation) as Elvis passed away. Lisa was just 9 years old at the time, but since then has found great success just by being her father’s daughter.

She is now a singer-songwriter and has produced three solo albums, all of them going gold. She does have a family outside the music industry, as she was married three times. Two of those marriages were to well-known men in the entertainment industry, Nicolas Cage and Michael Jackson. She has four kids of her own; Riley, 29, twins Harper and Finley, 10; and the late Benjamin, who died at age 27.

See photos of Lisa Marie Presley through the years

This photo of Lisa Marie Presley was taken when she was just born in 1968, surrounded by mother Priscilla and father Elvis at the Baptist Hospital at Memphis, Tennessee.

This shot of Lisa Marie Presley was taken in 1977 when she was nine years old. She was attending the first-ever ‘Children’s Premiere’ benefit for the Thalians Community Mental Health Center at Cedars Sinai Medical Center in Los Angeles.

This photo from 1981 shows Lisa Marie Presley and her mother, Priscilla Presley, spotted at Joanna Restaurant.

The above photograph was taken around 1990 in New York. Lisa is looking beautiful as ever with her dark, straight hair!

Back in 1995, Lisa Marie appeared with then husband Michael Jackson (people are still trying to figure that one out) on Prime Time Live, interviewed by reporter Diane Sawyer, also seen in the image above.

Taken in the year 2000, Lisa was attending the Lucky Numbers Hollywood Premiere (above) on October 24, 2000 at Paramount Pictures in Hollywood, California.

When Capitol Records released Lisa Marie’s first studio album, 2003’s To Whom It May Concern (which reached #5 in America), they accompanied it with the above publicity photo of her.

In the image above, fans got to see Lisa Marie in action as she rocked out on The Tonight Show with Jay Leno on May 24, 2005.

This one was taken in 2007, picturing Lisa during the 2007 Clive Davis Pre-GRAMMY Awards Party — Arrivals at Beverly Hilton Hotel in Beverly Hills, California, United States.

On September 13, 2013, Lisa Marie appeared on CBS’ The View (above), where she discussed and performed music from her album Storm & Grace. Here she’s seen with former co-host Sara Gilbert.

The shot of Lisa above was taken in 2015 as she was arriving at the Mad Max: Fury Road Los Angeles Premiere at TCL Chinese Theatre IMAX in Hollywood, California.

The most recent formal event that Lisa attended was in 2017 at ELLE’s 24th Annual Women in Hollywood Celebration at Four Seasons Hotel Los Angeles at Beverly Hills.

Lisa was grocery shopping with her twin daughters, Harper and Finley, in this photo, which was one of the last times she’s been photographed in public as she has been trying to cope with the death of her son. On July 12, 2020, at only 27-years-old, Benjamin Keough committed suicide via a self-inflicted gunshot wound.