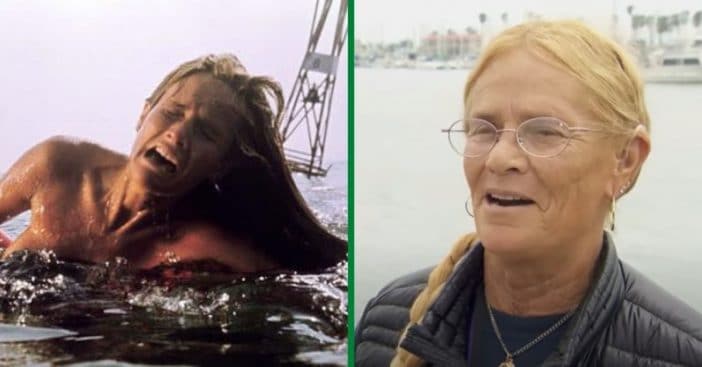 You may know Susan Backlinie from the hit 1975 thriller Jaws as the very first shark attack victim at the beginning of the film. Her character’s name was Chrissie Watkins, and Backlinie herself is a former stuntwoman, so she was perfect for this role. In addition to being a stuntwoman who specialized in swimming work, she was also an animal trainer.

She was truly the face of the movie as she was the first victim we saw get their life taken from a monstrous undersea creature. According to Wikipedia, her scene even scared co-star Richard Dreyfuss. After seeing the daily occurrence of filming her shark attack scene, he says it “absolutely terrified him.”

Contrary to what many people may believe, Susan was intentionally not warned when she was going to be pulled underwater to create genuine reactions of fear and surprise. It definitely worked not just for her, but to also invoke fear in others. This was Steven Spielberg’s main goal as director. It’s also been talked about dozens of times that Spielberg’s incredible score of the film helped bring upon suspense in viewers.

Jaws was actually Susan’s very first credited role, according to her IMDb. She does not have many acting credits to her name, her final one being in 1982 with an appearance in the TV series The Fall Guy. She has since appeared in documentaries, though, many of them on the legacy of Jaws. The last documentary she appeared in was in 2015.

Did the woman in ‘Jaws’ break her hip?

Her scene in Jaws took just three days to shoot while she was hooked up to a harness. As discussed many times in the past, the crew struggled on achieving the desired effects as the mechanical shark was often not functioning correctly. Regardless of this, Jaws remains a timeless classic to this day. After her success in the film, she also appeared in one of Spielberg’s other films, 1941, parodying her Jaws character. Rumor also has it that Susan broke her rips and hip while filming, which is not true. Although, it’s important to remember, her screams of terror were very real!

These days, Susan is very quiet. Wikipedia reports that she currently works as a computer accountant in the state of California. Do you remember Susan Backlinie in Jaws?