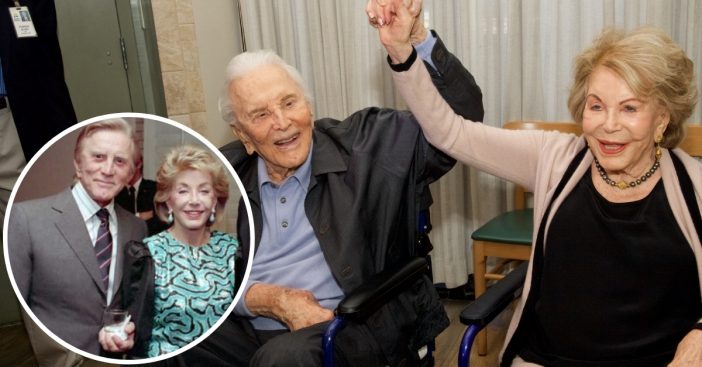 Kirk Douglas is 102 years old and will reach his next birthday milestone on December 9th. Most loyal Douglas fans know this! However, many people don’t realize that his wife, Anne Buydens, just turned 100. Talk about longevity in their family! The lovely couple has been married for 64 years and the actor calls his wife his “soulmate.” Aww!

Part of the Douglas family includes his son, Michael Douglas, and his wife Catherine Zeta-Jones. With this being said, Anne often doesn’t make headlines as much as the other members of the family do, but she is this time!

Anne Buydens was born in 1919 in Hanover, Germany and her family moved to Belgium shortly after. She was well-educated and knew several different languages, including English, German, and French. She was living and working in Paris when she met actor Kirk Douglas and he asked her on a date in 1953.

Anne had been working as a film publicist at the time when she was introduced to Douglas who was filming Lust For Life. She had met him in his trailer, and according to their joint memoir called Kirk and Anne, he was a bit of a ladies man! Anne says that Douglas “took a look at me and then he said, ‘Would you like to have dinner with my friends at some chic restaurant?’ And I said, ‘No, thank you, I think I’ll go home and make myself some scrambled eggs.’ That was not what he expected.”

Douglas was allegedly pretty frustrated when Anne initially turned him down, but he would eventually hire her to be his publicist. “With no romance in the picture, I stopped trying to impress Anne. Instead, I stopped talking about myself and began to listen to her,” Douglas wrote in their memoir.

The two married in 1954, however, it wasn’t a totally traditional marriage between the two. The memoir reveals that Douglas had affairs with actresses like Rita Hayworth, Patricia Neal, and Joan Crawford’s daughter, Christina Crawford. Despite this, Anne says Douglas never kept these things from her. “Kirk never tried to hide his dalliances from me. As a European, I understood it was unrealistic to expect total fidelity in a marriage.” Wow!

With that being said about their marriage issues, the two even struggled with financial problems. Despite Douglas being such a world-renowned actor, his money manager at the time was not up to par with where they should be, and Douglas was nearly broke. That’s when Anne stepped in and helped him change managers and secure his finances better.

The two clearly have a relationship where they can overcome anything!

Even now, the flame between the two has yet to burn out. “I gave him the iPad for his 100th birthday,” she recalled, “Every night we always have our what we call ‘golden hour’ about 6, 6:30, until 7:15 pm, and then dinner. And during this golden time, we each have our drink and used to talk about what happened during the day.”

We’re so happy to hear that the couple is still going strong today and continuing to do such wonderful things for each other, regardless of age.

Be sure to SHARE this article if you absolutely adore this lovely couple! All the best to them from all of us at DYR!

Check out the video below of Anne Buydens and Kirk Douglas talking about the love letters they sent to each other back in the day: