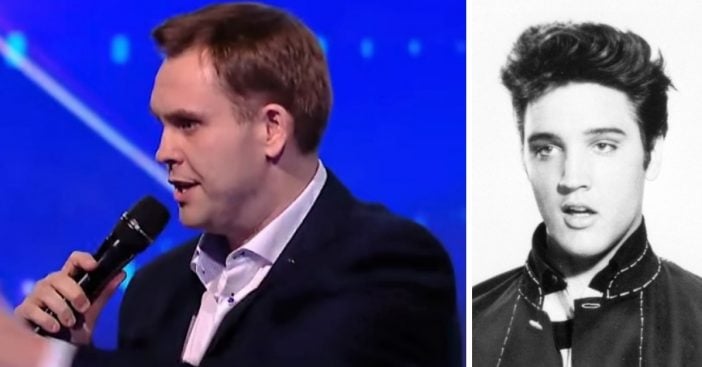 A recent contestant on Ireland’s Got Talent received the Golden Buzzer after he wowed the judges with his voice. Barry Darcy sang the Elvis Presley classic “The Wonder of You,” and sounded just like the iconic singer! You won’t believe how similar they sound.

His amazing audition comes with a heartbreaking story. Just a few years ago, he suddenly lost his ability to walk. In fact, doctors gave him a 50/50 chance of ever walking again! Now, here he is… walking, performing, and singing on Ireland’s Got Talent.

What happened to Barry?

Barry shared his story before his audition on the show. He said that one day he woke up and tried to get out of bed. He just fell on the floor and realized he couldn’t get up! Barry had a herniated disc in his back that aggravated his nerves, paralyzing him from the waist down.

With only a 50% chance of ever walking again, Barry went all in with his therapy.

However, Barry said he never would have been able to recover so quickly without the love and support of his family. Barry and his wife have two boys, who were also at the audition. He said that his family developed a deep bond while they went through this difficult time. How sweet!

Learn his inspiration for choosing this Elvis song to audition with

Barry said his family was his inspiration for choosing the song for his audition.

According to Madly Odd, Barry said, “I’m singing an Elvis Presley song, ‘The Wonder of You’, and it means a lot to me now because I sat back in that wheelchair and I looked at my family and I saw what they were doing for me and having to carry on with their own lives while dealing with what was going on with me. The words in that song, when no one else can understand me, they did understand me and they understood very well what was going on with me.”

The audience and judges can be seen enjoying his performance, smiling and swaying as he performs. What do you think about Barry’s story and performance? Do you love this song?

If you enjoyed this article and video, please SHARE with your friends and family who are Elvis fans!

Watch the incredible video below of Barry singing “The Wonder of You” by Elvis Presley and receiving the highly-coveted Golden Buzzer:

Previous article: A Family Of Three Lives Off The Grid In This Hawaiian Tiny Home
Next Post: Celine Dion Shares Advice On Overcoming Loss Three Years After Husband’s Death