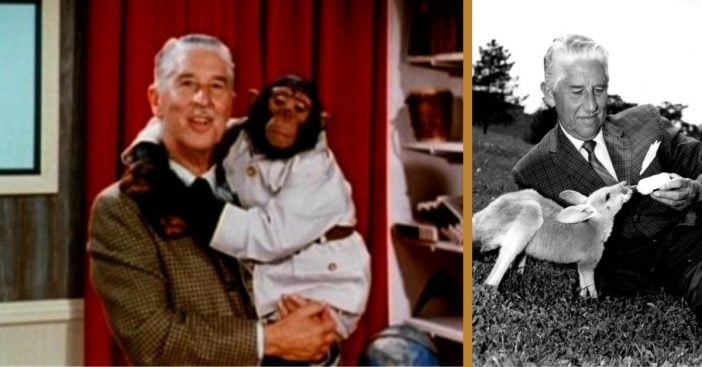 Mutual of Omaha’s Wild Kingdom with host Marlin Perkins was an American documentary television program that was produced from 1963 to 1988 and was revived in 2002. The program featured wildlife and nature presented by zoologist Marlin Perkins, who quit school to become a laborer at the Saint Louis Zoological Park.

He worked his way up the ranks and eventually became a director at the zoo back in 1938 and shortly began hosting television programs based on wildlife afterward. Before Wild Kingdom, there was also Zoo Parade, a show in which he encountered a pretty nasty bite from a rattlesnake!

The success that Perkins gained from Wild Kingdom resulted in him becoming a true advocate for wildlife conservation and endangered species. Perkins helped establish the very beginnings of the wildlife conservation movement, which would then pave the way for people like Jane Goodall, Steve Irwin, and many more wildlife activists.

Perkins also established the Wild Canid Survival and Research Center in 1971, a wolf sanctuary that helps breed wolves and ready them for replacement into their natural habitats.

Perkins retired from zookeeping in 1970 and Wild Kingdom in 1985 due to health reasons. He continued to be the director at the St. Louis Zoo up until his death in 1986. He was truly a pioneer from start to finish for wildlife conservation!

Do you remember watching Mutual of Omaha’s Wild Kingdom?

Then you need to check out this video of Marlin Perkins’ most memorable moments on the show:

Here are some memorable and dangerous moments from show..

Click for next Article
Previous article: Seals & Croft’s Hit “Summer Breeze” Gets A Lot Deeper Than Just Longing For The Season
Next Post: See This Dad’s Reaction After Going To Costco For The First Time