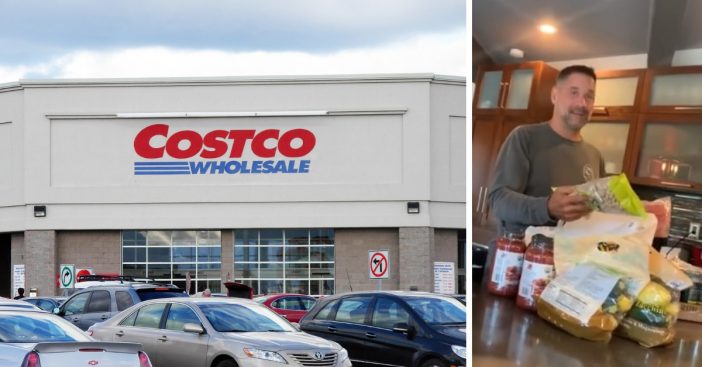 You won’t find many people who haven’t been to Costco or at least heard of the giant warehouse chain store. One father from Los Angeles recently went to Costco for the first time, and his son posted a video of his reaction that soon went viral.

49-year-old Tom Musto shared his excitement with his son TJ after going to Costco for the first time. One of Tom’s friends suggested that he try out the store to find cheap items for his big Sunday dinners. He had apparently never heard of Costco before his friend suggested that he go there.

Tom called TJ while he was inside Costco and asked if TJ had ever heard of Costco. He also said he was finding some incredible deals! When Tom got home, TJ took a video of his excited father sharing all of the deals he got from the store.

He starts sharing some of the prices of the things he bought. Only $9 for the bag of nuts, which he said would be around $12.50 for a smaller bag at another store. Only $8 for a huge package of sausages! You can just tell how happy he is to have found his new favorite store.

Did Costco rope Tom in enough to get his own membership card?

At the end of the video, he said his friend Stephanie will get him a Costco membership card for his birthday. It will surely go to good use! Naturally, this sweet video has gone viral and Tom is now receiving the attention of ladies. TJ said that a lot of women have been commenting and saying how handsome his father is.

Tom is currently going through a divorce, so the attention from social media is really boosting his confidence and self-esteem during a hard time. TJ says that his father is a very genuine guy and he loves that he gets excited over the little things in life.

What do you think about Tom going to Costco for the first time and being this excited about his purchases? We hope to see more videos of him in the future! Please SHARE this video with your friends and family who love Costco and could use a smile today!

Check out the video of Tom sharing what he bought at Costco and see his excitement for yourself:

My dad went to Costco for the first time in his life pic.twitter.com/imtDNSRGwh