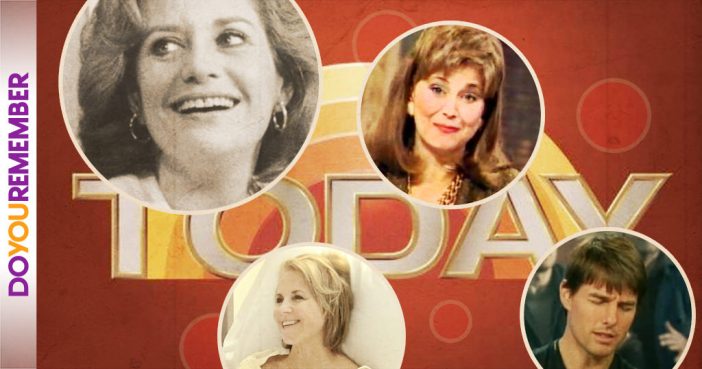 Today premiered on NBC and was created by the network’s vice president,Sylvester B. Weaver, Jr., the program was the first of its kind, combining national news, celebrity interviews, lifestyle segments and lighthearted stories aimed at a wide-ranging audience. Dave Garroway hosted the early episodes of the show, before being replaced in 1961 by John Chancellor. Since then some of the top names in media have served as host, including Barbara Walters, Tom Brokaw, Bryant Gumbel and Katie Couric, to name a few. The show’s popularity has spawned copycat versions on other networks, with ABC’s Good Morning America, CBS’ The Early Show and Fox News Channel’s Fox & Friends among those that have tried to duplicate the successful formula that has made Today the fifth-longest-running American television series. In honor of its 62 years on the air, DoYouRemember looks back at some of the Most Memorable Today Moments of All Time.

This was the original promotional spot for Today, which aired for the first time on January 6th, 1952, during the Sound Off series.

Barbara Walters worked as a writer and segment producer for Today and occasionally hosted the program during her nine-year run.

As part of NBC’s 60th-anniversary show in 1986, Cosby kids Theo (Malcolm-Jamal Warner) and Rudy (Keshia Knight Pulliam) were treated to a history lesson, which featured footage of the very first Today episode and the ever-loveable J. Fred Muggs.

One of the program’s most popular hosts, Jane Pauley gave a teary-eyed, heartfelt farewell just one week after marking her 13th anniversary on the Today show. She passed her alarm clock to Deborah Norville, who broke down while accepting it.

Tom Cruise explained his views on Brooke Shields, medicinal therapy and the history of psychiatry in this caustic and unforgettable 2005 interview with a “glib” Matt Lauer.

Katie Couric Gets a Colonoscopy on Today

Katie and her friend Kim found the humor while getting prepped for their on-air colonoscopies during this 2000 Today episode. However, what started out as fun turned out to be a potential life-saving examination when the doctor discovered a number of polyps, which they were able to remove.

In May 2006, after 15 memorable years on the air, Katie Couric said goodbye to her Today audience as the show’s staffers each wished her well, shared their fondest memories and toasted to her success.

The Best of Willard Scott

America’s favorite weatherman/centenarian birthday greeter, Willard Scott’s tenure on Today began in 1980. His spontaneous, entertaining on-air antics have made him an audience favorite for almost 35 years.