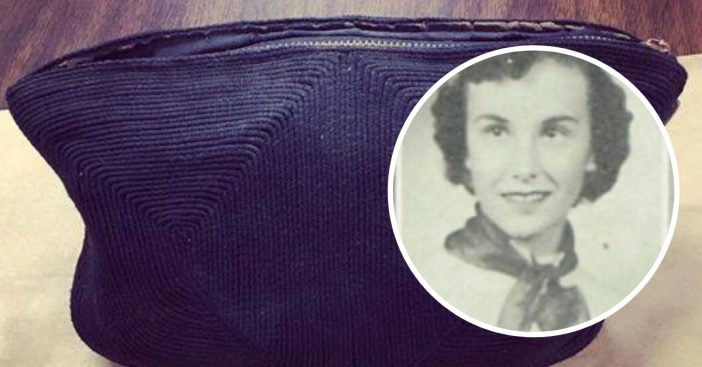 A teenager named Martha lost her purse in 1954. 65 years later, it was found, complete with everything still inside! Can you believe that? Find out where the purse was found and what was still inside. Hint: it may make you really nostalgic for your high school prom.

Jeffersonville High School in Indiana is being torn down. During the demolition, someone found a purse lost behind an old cabinet. It became a time capsule of sorts, letting others reminisce about high school in the 1950s.

Martha Ina Ingham is now in her 80s, and never thought she would see that purse ever again. They were able to figure out the purse belonged to Martha because her ID was still inside! Along with her Social Security card and other more interesting mementos. Martha was a senior at the high school in 1955.

What Else Was In The Purse?

Along with Martha’s ID and Social Security card, there were clippings of newspaper articles from 1954, a Jefferson High School 1953-1954 basketball schedule, a coral lipstick, a pin, Juicy Fruit wrappers, a bus schedule, and even a note from a boy asking her to prom!

The note looks just as it might have back in 1954. There were actually two notes! One was from someone signed “Torchy” asking Martha to the prom. Another was a longer letter from a boy named Carter. Both of the notes also mention another boy named Paul. Martha must have been quite the catch!

It seems like Carter might have been flirting and trying to get Martha to stop liking someone named Paul! He says in the letter, “I think Paul is an alright guy. But you’ll never catch him, he runs too fast! Ha! Ha!” Someone who works with Greater Clark County Schools, shared a photo of the bag on Facebook, hoping to reach Martha. They found out that Martha is still alive and lives in Florida. We bet she was so happy to receive that bag and reminisce over those high school memories!

Are you happy to hear that this bag got back to Martha? Do you have any similar high school mementos or memories? What do you think about someone finding this bag so many years later, fully intact? This is just such a nice thing that Martha, also called Marty, got to have back!

If you enjoyed this article, please SHARE with your friends and family who love these nostalgic stories from the 1950s!

Previous article: ‘NCIS’ Officially Confirms That Ziva David’s Storyline Is Not Over Yet
Next Post: 7 Things To Know Before Eating McDonald’s Famous Fries