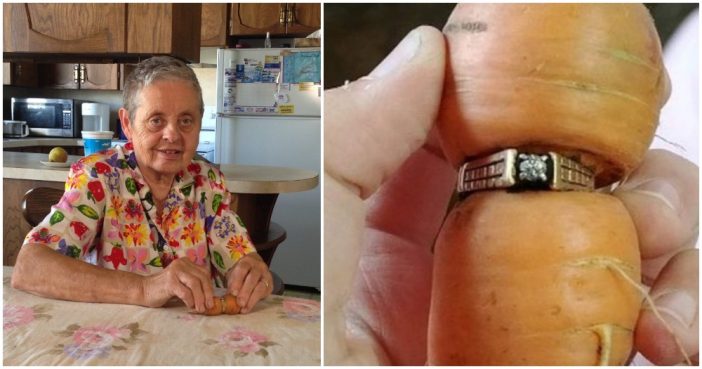 If you’ve ever been engaged or married, you’re probably familiar with that terrifying moment when your ring is misplaced temporarily. In this situation many think the worst, I lost my engagement ring. It happens. When Mary Grams, now 84, lost her engagement ring while pulling weeds at her family farm in Alberta, Canada, in 2004, she thought it was gone forever. This is where the story gets seemingly unbelievable.

It was September of 2004, when Mary Grams, of Alberta, Canada, lost her diamond-encrusted engagement ring while working on her family farm. She spent days looking for it but to no avail. Last week, nearly 13 years later, her daughter in law plucked a weird-looking carrot from the garden, with a diamond ring tightly wrapped around it.

“I went to the garden for something and I saw this long weed. For some reason, I picked it up and it must have caught on something and pulled [the ring] off,” 84-year-old Mary Grams recalls about the day she lost her engagement ring, in 2004. She had worn it on her finger since 1951, a year before she married her husband, Norman. “We looked high and low on our hands and knees. We couldn’t find it. I thought for sure either they… it or something happened to it.”

A few weeks after losing her engagement ring, Mary bought herself this one, much smaller, to replace it. #Camrose pic.twitter.com/sg9WN4y1Pb

Mary did not tell her husband that she lost the ring. To not hurt his feelings she decided to buy herself a similar-looking ring, in hopes that he wouldn’t notice it was missing. “I didn’t tell him, even, because I thought for sure he’d give me heck or something,” the woman told CBC Canada.

Mary, 84, says she didn't know if they were kidding or not, but when her granddaughter brought the carrot over – she knew: "It's mine!" #yeg pic.twitter.com/Ft7IMUeSMR

At one point, Mary and her family moved to Camrose, but they still maintain a garden at the old farm, near Armenia, which has been in her family for 105 years. About a week ago, as her daughter in law was plucking carrots from the garden, she noticed a really misshapen one that looked like a big fat finger wearing a very tight ring. It turned out that the vegetable was actually wearing a ring.

I knew it had to belong to either grandma or my mother-in-law because no other women have lived on that farm,” Colleen Daley told reporters. “I asked my husband if he recognized the ring. And he said yeah. His mother had lost her engagement ring years ago in the garden and never found it again. And it turned up on this carrot.”

“If you look at it, it grew perfectly around the [ring]. It was pretty weird looking,” Daley added. “I’ve never seen anything like that. It was quite interesting.”

Mary Grams was obviously ecstatic to get her old piece of jewelry back, and she intends to put it back on her finger, where it belongs. “I’m going to wear it because it still fits,” she said.

Sadly, Grams’ husband passed away five years ago not long after the pair celebrated 60 years of marriage.

Believe it or not, this is not the first time this has happened. Back in 2011, a Swedish woman also made news headlines after finding a ring she had lost 16 years prior wrapped around a carrot in her garden. So if you ever lose round jewelry in your garden, a good way to find it is to plant carrots.

Thankfully the ring still fits, and Grams plans to wear it.

Dog Runs Away After Being Thrown From Car During Crash. 65 Days Later, She Reunites With Owner