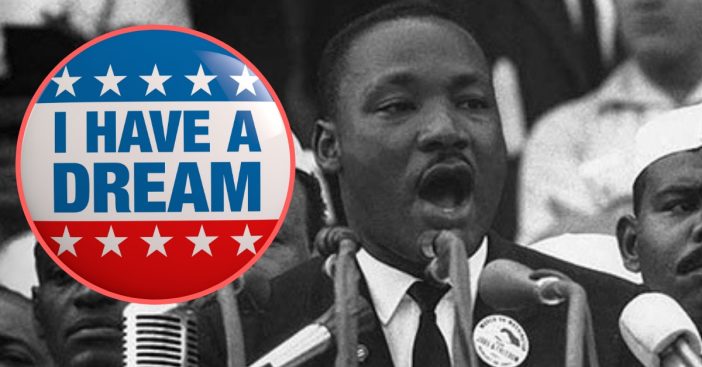 You probably know at least part of the “I Have a Dream” speech that Rev. Martin Luther King Jr. recited at the March on Washington for Freedom and Jobs. He shared the iconic speech on August 28, 1963, and we vow to remember it every year on Martin Luther King Jr. Day (January 21). Note To Reader: Came For The MLK Video? Scroll Down/Click To Watch Below :).

Here are some things you may not know about MLK’s “I Have a Dream” speech:

1. One part of the speech most can recite is actually from another speech

As you read this quote, you might remember it or even be able to recite along with it, “I have a dream this afternoon that my four little children will not come up in the same young days that I came up within, but they will be judged on the basis of the content of their character, not the color of their skin.”

That speech was from 1963 as well, but from when King spoke in Detroit. This was two months before he addressed Washington with his “I Have a Dream” speech.

2. The speech almost didn’t include “I Have a Dream”

King’s staff members did not want him to talk about dreams in his speech. It had never been done before and they did not think it would go over well with the crowd. They also didn’t want him to sound repetitive from his last speech in Detroit. In fact, the night before the speech, his staff wrote him a new speech called “Normalcy Never Again”. However, at the last second, he went with his original speech after gospel singer Mahalia Jackson yelled out, “Tell ’em about the dream, Martin.”

Many celebrities showed up to the march including Harry Belafonte, Marlon Brando, Lena Horne, Sidney Poitier, Burt Lancaster, Sammy Davis Jr., and Charlton Heston. Many thought that the celebrities attending would help turn the march into a more festive event and reduce the amount of violence.

4. One march worker fell asleep during the speech

One college student working for the march, answering phones, was so tired that she accidentally fell asleep and missed the speech!

5. The “I Have a Dream” speech has been ranked No. 1 by scholars

In 1999, a panel of scholars ranked the best speeches of the 20th century. It included other iconic speeches such as JFK’s “Ask Not What You Can Do” speech, but King’s ranked No. 1. Do you agree that his speech is the best and most memorized still to this day?

What do you think about Martin Luther King Jr. and his speech? If you enjoyed this article and love re-watching the “I Have a Dream” speech, please SHARE with your friends and family!

Watch Rev. Martin Luther King Jr.’s FULL “I Have a Dream” speech below: