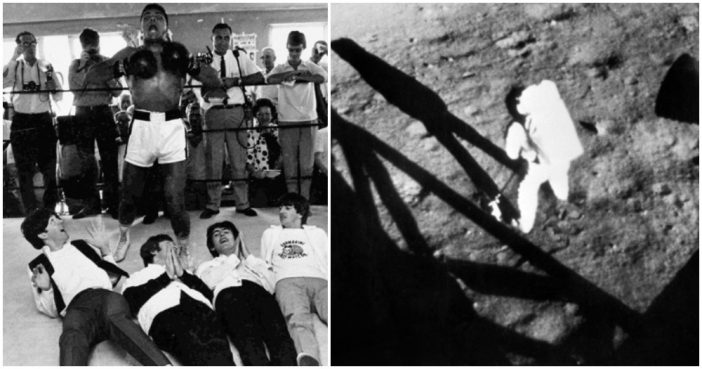 The 1960s was a decade of enormous cultural importance, with shifts in public image, political unrest, art, and music all adding up to a period defined by the people taking control of their world and turning it on its head. It was a time that saw the rise of public figures who would change the landscape of their fields. Martin Luther King Jr. would drive the American Civil Rights Movement forward leaps and bounds, while fashion designer Mary Quant would give a newly sexually-liberated society a whole new way to dress. Music was no longer dominated by big bands or orchestras, instead of being taken over by groups of youngsters like The Beatles, The Rolling Stones, and The Jimi Hendrix Experience.

The politically-wise amongst them, such as Bob Dylan, would even use their music to further their political agenda. The sixties saw science fiction come to life, with man stepping foot on the moon for the first time, televised far below on Earth, while a generation of young men was seeing action first hand that was only previously witnessed in war films, taking up arms in the controversial Vietnam War. And it was all caught on film, immortalized in images captured by hordes of photographers looking for the next Pulitzer Prize-winning photograph. Some of those images are iconic simply for their visual appeal, while others are iconic for their ability to define the time that they were created. Following are 19 of those photographs, each one with a fascinating tale to tell.

January 19th, 1963 In town while working on his film Three Beggars Opera, Rat Pack member Sammy Davis Jr. takes a photograph at the edge of the American sector of Berlin. The city had been divided up by what became known as The Berlin Wall, constructed by the German Democratic Republic, and would remain divided until the 1990s.

May 19th, 1963 Competing in the ‘Fast Girl’ trophy race at Brands Hatch in Kent is 22 years old Sally Stokes. Although initially launched in the late 1950s, the Mini becomes one of the most popular cars of the 1960s, thanks in part to the prominence of the Cooper model in competition racing such as this.

June 11th, 1963 In protest against what he called government persecution of Buddhists, the 73-year-old monk douses himself in petrol in Saigon, Vietnam, and burns himself to death in front of thousands of onlookers. Sadly Quảng ức’s act had little effect on South Vietnamese leader Ngô ình Dim.

4. Martin Luther King Has A Dream

August 28th, 1963 Addressing over 250,000 civil rights supporters gathered in front of the Lincoln Memorial, Martin Luther King Jr. delivers his famous “I Have A Dream” speech, in which he calls for an end to racism in America. Following the speech, the FBI mark King as a major enemy of the United States.

November 28th, 1963 Six days after the assassination of John F Kennedy in Dallas, Texas, his widow Jacqueline manages a weak smile as she visits his grave in Arlington National Cemetery. It would take a ten-month investigation before officials concluded that the assassination was carried out by Lee Harvey Oswald.

6. The Beatles Arrive In America

February 7th, 1964 John, Paul, George, and Ringo step off the plane at John F Kennedy airport ahead of their performance on The Ed Sullivan Show, their first American TV appearance. An estimated 45% of all television sets were tuned into the show, marking the height of Beatlemania.

February 10th 1964 Director Alfred Hitchcock lurks in the bushes in Hollywood, California. 1964 would see the premiere of his film Marnie starring Tippi Hedren and Sean Connery, fresh from success as James Bond. The film receives poor reviews, but fails to mar Hitchcock’s reputation as “The Master of Suspense”.