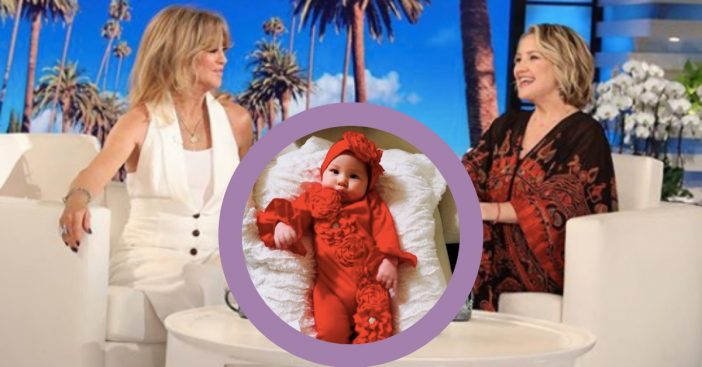 So, in case you weren’t aware, Kate Hudson recently gave birth to a beautiful daughter and her mother, Goldie Hawn, was right there to witness the entire thing. Maybe a little too close for comfort! The two recently hosted The Ellen Show while Degeneres was off for a bit and couldn’t help but reminisce on that special day when Hudson’s baby girl was born.

There’s no relationship like the one Hudson and Hawn have together, and it’s apparent that Hawn was incredibly supportive of her daughter during the birthing process, and was also super excited to help welcome her granddaughter into the world.

Before getting into the hilarious talk that we know everyone is waiting to get the deets on, we can’t forget the cutaway to Ellen with a random baby. Yes, that happened. Hudson wanted to cut away to ‘live footage’ of Ellen holding Hudson’s baby. “Are they gone?” Ellen asks after some amount of time. “Take it, take it,” Ellen says as she hands off the random baby to someone else.

“Who was that baby, by the way?” Hawn asks Hudson, who responds with, “It wasn’t my baby!”

Now, the part everyone has been waiting for.

Hawn and Hudson were laughing simultaneously about what the doctor had said about Hawn getting too close to the action when Hudson began pushing. She describes it as the following:

“He was sort of like this,” referencing the doctor getting into position to pull the baby out, “Leaning down, doing the thing, on the baby. And I’m trying to get in on him, to try to look over his shoulder. And now I see the head, and I’m going, ‘oh, there’s the head,’ and then it went back. And he said, ‘Goldie, if you get any closer, you’re going to fall in.'” (Cue cackling from the audience.)

Despite the hilarious comment from the doctor, both women agreed that the doctor was absolutely incredible and helped aid Hudson in a very successful and happy birthing process. The rest of the show, the women talked about what they hope Hudson’s daughter, Rani, doesn’t inherit from their family line, which ended up being producing more sweat than the average person.

They also discussed confessions, such as Hudson stealing Hawn’s car at one point when she was younger and have a party while her mom was out of town. They clearly have a tolerant and loving relationship!

Be sure to SHARE this article if you love Goldie Hawn and Kate Hudson!

Check out the full segment from The Ellen Show below: