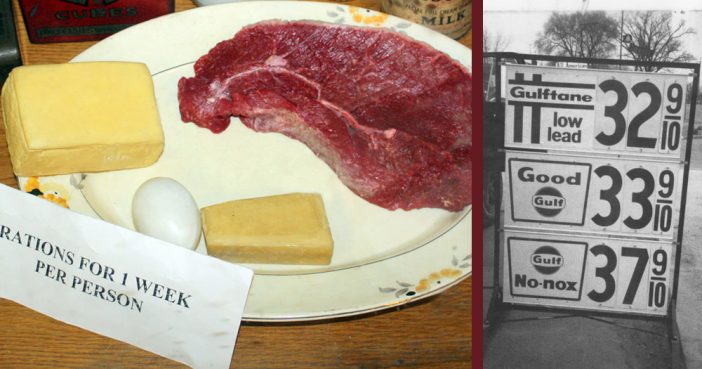 During World War II, the war caused a shortage of many items that people used on a daily basis. It caused a shortage of not only food but rubber, metal, clothing and more. Why did the war cause shortages? Many of the processed or canned foods were sent to the military and transportation of fresh foods were limited because gasoline and tires were in limited supply. There were also limitations on importing.

There were so many shortages that the government needed to establish a system of rationing. Every American received ration books during the war which contained stamps that could be used for certain items. You couldn’t buy those items without giving the store your stamp. So, if you ran out of stamps, you couldn’t get those items anymore that month.

Many people also started victory gardens, which were basically personal gardens to help out with their own food supply. Do you remember which items were in the ration books? Here’s a list to help you recall:

Tire sales were stopped for almost a year and anything else that was made of rubber was rationed as well.

Dealerships had to stop selling cars and bicycles to civilians because car factories needed to produce more military vehicles and equipment. Radios, phonographs, refrigerators, vacuums, washing machines, sewing machines, and typewriters were also unavailable for civilian purchase during this time.

Not only was gasoline being rationed, but the national speed limit was also set at 35 mph in order to further save gas and rubber. You had to prove you needed gas and prove that you only owned five tires or less in order to receive a gasoline ration card.

Anything that came in a metal container was switched to a different tube. For example, dog food and toothpaste had to be switched.

The ration for sugar was set at only 1/2 pound per person per week. Coffee was also rationed to one pound every five weeks.

The military needed special shoes made, so civilian shoes were temporarily put on hold. Silk and nylons were also rationed. You really had to take care of what you had because you couldn’t always buy new.

Who remembers government bricks of cheese? I swear they made the best grilled cheese sandwiches in the world! Not too shabby mac ‘n’ cheese as well.. Whatever happened to government cheese, check out the video below!

8. The most controversial ration item

The most controversial item is said to be bread because it was not rationed under after the war was done. Wholemeal bread was replaced by white and many people complained of its taste, texture, and said it gave them digestive issues.

What other items do you remember were rationed? Or what did your parents or grandparents tell you about the time if you didn’t live it yourself? If you found this article interesting, please SHARE with your friends and family!

Click for next Article
Previous article: The Christmas Season Through The Years — What Was Popular The Year You Were Born?
Next Post: The Couple Who Died While Hugging Each Other In Bed In ‘Titanic’ Are Based On A Real Couple