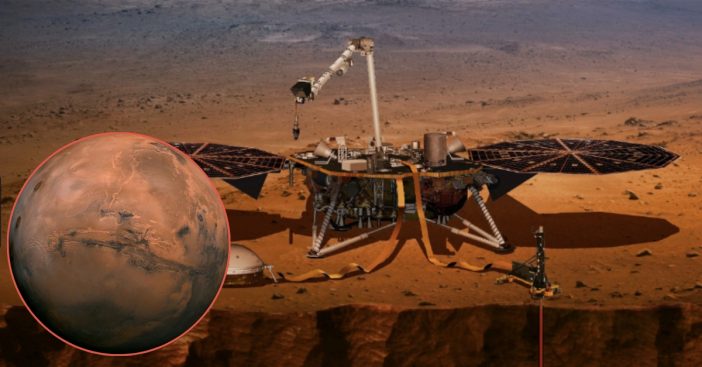 After 7 months of space travel, NASA’s InSight Lander has finally made contact with planet Mars. Just a few minutes after touching down, the device sent an official notice to NASA headquarters to signal its arrival. The device also provided a close-up first image of its surroundings on Mars from where it has landed.

Mission Control at NASA’s Jet Propulsion Laboratory celebrated with an eruption of happiness and applause at the notification of the landing. The Interior Exploration using Seismic Investigations, Geodesy, and Heat Transport (InSight) is being used to explore areas of Mars that have been undiscovered to this point, primarily the deep interior.

The InSight device was launched on May 5th and covered about 301,223,981 miles at a top speed of 6,200 mph. It was being followed and monitored by two cube satellites, which are also the first cube satellites to fly into deep space (called MarCO).

The MarCO satellites will be used to transmit data from the InSight device about Mars.

I feel you, #Mars – and soon I’ll know your heart. With this safe landing, I’m here. I’m home.
#MarsLanding https://t.co/auhFdfiUMg

Lori Glaze, acting director of the Planetary Science Division in NASA’s Science Mission Directorate, has expressed her excitement and determination on the InSight landing and anticipated data from the Martian atmosphere.

“We’ve studied Mars from orbit and from the surface since 1965, learning about its weather, atmosphere, geology and surface chemistry,” she says, “Now we finally will explore inside Mars and deepen our understanding of our terrestrial neighbor as NASA prepares to send human explorers deeper into the solar system.”

The reason why this landing is so monumental and historic is due to the fact that only 40% of missions sent to Mars are actually successful. This is due to the thin Martian atmosphere, which is only 1% of Earth’s. This means there’s virtually nothing there to slow down the entryway to the surface of the Red Planet.

The entry, descent, and landing phase of the InSight device began at approximately 2:47 PM ET. The device followed a standard landing procedure, which would help prevent the mission from being unsuccessful. This included deploying a parachute to help ease the initial 12,300 mph incoming from the device. The craft separated from the heat shield and deployed its three legs, landing safely and successfully.

“It’s taken more than a decade to bring InSight from a concept to a spacecraft approaching Mars — and even longer since I was first inspired to try to undertake this kind of mission,” he said, “But even after landing, we’ll need to be patient for the science to begin.”

Did you know that NASA has been exploring Mars since 1965? Be sure to SHARE this amazing, historical news with your friends and family!

Check out the full clip below of NASA’s reaction to the touchdown confirmation.

Previous article: Inside This 3,000-Year-Old Coffin Tells Amazing Story From The 13th Century
Next Post: Jerry Springer Is Coming Back To Television With New Courtroom Show