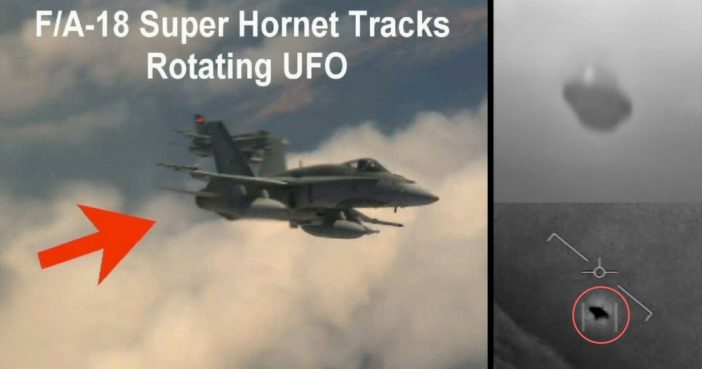 Newly declassified video and audio show U.S. Navy pilots apparently encountering a UFO — with no wings and no tail — as they flew their Boeing F/A-18 Super Hornet fighter jet along the East Coast in 2015.

“What … is that thing?” one pilot can be heard saying in the video.

“Oh my gosh, dude! Look at that flying!” another exclaims.

According to a report on ABCNews.com, the 35-second footage, captured by an infrared camera aboard an F/A-18 fighter jet traveling at 25,000 feet, was released Friday by To the Stars Academy of Arts and Science (TTSA), a private scientific research and media group. It is led by Hal Puthoff, a NASA and U.S. Department of Defense adviser, and James Semivan, a former Central Intelligence Agency official.

The Department of Defense declined to comment on the video.

When they flew lower to have a look at it, Fravor said, “it accelerated like nothing I’ve seen before.”

Fravor said he was mystified by what he saw in the 2004 incident. “It had no (exhaust) plumes, wings or rotors and outran our F-18s. I want to fly one.”

CBS Local has the U.S. military released visible proof of alien spacecraft flying over Earth? The Pentagon has released three videos taken by the flight recorders of U.S. Navy fighters in 2015, which seem to show evidence of a UFO encounter.