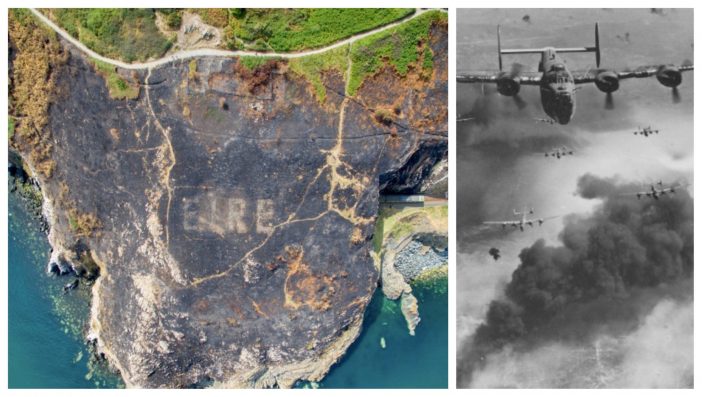 Reports have surfaced on the Internet that a wildfire in Ireland uncovered what seemed to be an old “Éire” sign that was used in World War II. Éire signs were used to signify to war bombers that they were flying over a neutral country. The sign was apparently hidden by pretty thick undergrowth, but was able to seen clearly from a sky’s view after the fire.

The word Éire means Ireland in Irish. The Defence Forces Air Corps were the first to notice and discover the landmark from above. They discovered it while putting the fire out during that emergency assistance.

The Air Corps shared their own public thoughts upon the finding. They said, “The signs themselves are quite common on the west coast but unusual on the east. The Air Corps helped put the fire out and then the Garda helicopter, which we fly, noticed the sign emerging from the past.”

The Bray Head fire combined with recent heavy rain has resulted in the "Eire" sign becoming visible from the air once more. The sign was made during the 2nd World War in order to warn Allied & German airmen that they were flying over a neutral country. #Wicklow #EIRE @barrabest pic.twitter.com/CYaXtpoRtS

There are 83 additional signs placed along the Irish coast, where this Éire stone was found, and up to 165 tons of stone were used to create them for navigational purposes. Many of the signs were used by both Allied and German pilots. Furthermore, many of them are still visible and have been restored by volunteers overtime.

The official website of Éire Markings have also chimed in on the rare discovery. They said, “Today, we take high technology navigational aids for granted. In the 1940s, GPS did not exist. In 1942-43, close to the locations of the coastal watch huts, signs were placed on the Irish coast to identify the land below as Eire, and not, for example, Great Britain or Northern Ireland. Shortly after the EIRE signs were constructed, mostly by the volunteers of the local Look Out Post (known in the documentation as LOPs), the identifying number of the relevant LOP was added, enhancing the signs’ value as a navigational aid.”

Scorched earth left from the Gorse Fire in Ireland reveals what's believed a sign dating back to World War II.

The sign reading "ÉIRE" was placed along the coast to warn Allied and German airmen they were flying over neutral territory, local media said. https://t.co/Ga4LS0Kgoo pic.twitter.com/ufVe0s5Gj8

Fox News has also concluded that any apparent heatwave or natural disaster consisting of immense heat will likely remove any growth covering up some historical landmarks such as this one. Watch the clip below of a sky-cam circulating over the historical stone!

Be sure to SHARE this article if you thought this historical finding was interesting!