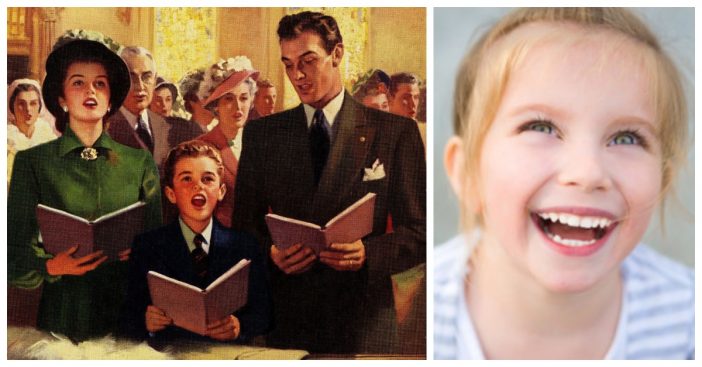 Chances are if you’re a practicing Catholic or Christian, or are affiliated with any type of religion in general, you may not have particularly enjoyed going to church when you were younger. Many young children cannot keep their attention fixed on the priest throughout the mass and often end up playing with the kneeler or the hymnals.

However, some interesting research has surfaced pertaining to children and church. Studies have shown that kids who are taken to church grow up to be happier adults. So, whether you paid attention in church or not as a kid, it probably had some decent effect on you and proves even further today.

The research was published in the American Journal of Epidemiology and they found that those who attended church or any kind of religious services at least once a week as children or teenagers, were 18% more likely to report being happier in their twenties than those who never attended those services.

The study also confirmed that kids who attended church or religious services once a week had a 33% less chance of getting involved in drugs, less likely to have sex at an earlier age, and less likely to have a sexually transmitted infection. Additionally, those who prayed or meditated either at church or on their own time reported greater quality of life, easier processing of emotions, and were generally more forgiving people.

The study particularly examined psychological well-being, mental health, health behavior, physical health, and character strength outcomes in young adulthood over 5,681 to 7,458 people. The mean baseline age was 14.74 years and there were 8–14 years of follow-up included. Through these techniques is how they concluded their results of overall better quality of life and general happiness for kids/teens who attended church.

There were some more interesting details included in the study as well, which proved that regular church attendance had a connection to a lower likelihood of smoking and a higher likelihood of voting!

For those who want to bring their kids or grandkids to church, but just don’t feel they are well-behaved enough to participate, we have good news for you. The study also showed that kids/teens who pray or meditate on their own schedule reported a lower risk of substance abuse and less likely to have depression later in life.

Be sure to SHARE this article if you went to church as a child!

Previous article: This Stuffed Grinch From Build-A-Bear Workshop Is The Perfect Gift For Kids This Holiday
Next Post: 12 Smells That Will Instantly Remind You Of Your Childhood In The 1960s