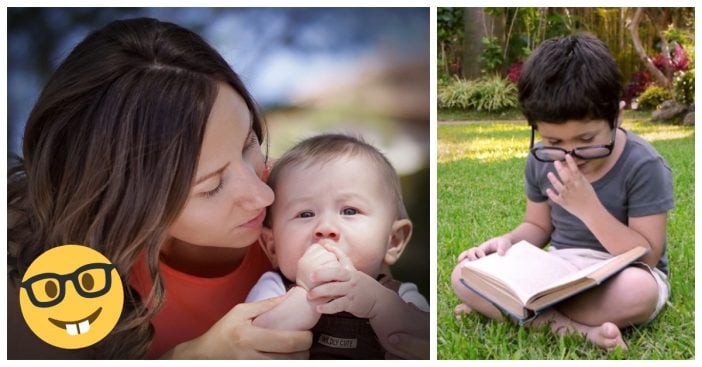 Moms everywhere, rejoice! Your kids are smart all because of you; cheers to that! Research that was published by Psychology Spot concludes that children are born with conditioned genes that work differently depending on which parent they’re from. In regards to intelligence, that all comes from the mother.

The Medical Research Council Social and Public Health Sciences Unit in the United States did a study on mothers in 1994, surveying 12,686 youth between 14 and 22 years old. Among the survey questions were things related to IQ, race, education and socio-economic status. They concluded the biggest predictor was the mother’s IQ.

It goes without saying that a children’s IQ is nothing without the proper stimulation and development through the early stages. It’s very important to ensure your child is evolving, learning, and being challenged mentally every day.

So, what if dad is a genius? Won his school’s science fair, got straight A’s all throughout school. Surely there’s got to be some credit given to the fathers out there.

Well, if you’re a female and carry the inactive intelligence genes of his X chromosome, you could potentially pass those genes onto your children (his grandchildren). It’s a win/win!

Another interesting conclusion made from the same study mentioned the controversial ideology of breastfed children being smarter than those who are not. The researchers confirmed that the advantage breast milk has on babies is very small (a total of 0.52 points in IQ), making it an insignificant factor for brain development and, overall, gaining some extra smarts.

Despite this study, it’s still evident that breastfeeding is still ideal for the proper growth and development of babies, even if the total IQ points are rather minuscule.

Did you get those smarts from your mother? Be sure to SHARE this article if you thought this study was interesting!