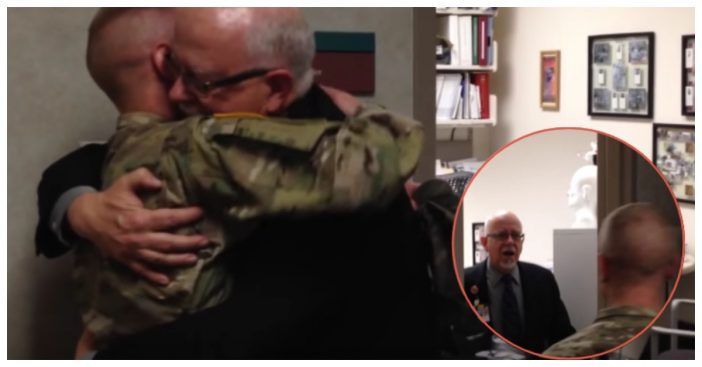 Get ready for your heart to be warmed; you might want to grab your tissues for this one. A soldier named Mason had been deployed for over a year as an MP. He informed his friends that he would be returning home earlier than expected, but decided to keep this bit of news from his father and surprise him. Well, his dad was certainly surprised!

It was an incredibly touching reunion, as most family-soldier reunions are. He showed right up at his dad’s work office and crept around the corner to surprise his father. “Oh my God,” the office receptionist said when she realized who Mason was and what he was there for. She made Mason aware of his dad’s surroundings and let him off to knock on his dad’s door.  “Mason!” his father exclaimed before breaking down and embracing his son.

It appears that Mason was having a grand old time surprising his father. He knocked on the door the first time to no answer because his father was currently in a meeting. So, he continued to knock and assuming that had it been anyone else, his father may have been a bit frustrated and annoyed. Instead, he was just completely dumbfounded and so unbelievably happy to have his son back sooner than planned.

“I can’t believe you,” his dad said, followed by a collective chuckle from his coworkers. Even the coworkers in the meeting couldn’t help but boast huge smiles.

According to the official surprise reunion video, Mason pulled the same surprise on his sister and then his mom. However, it’s unmatched to the emotion that Mason’s father felt for his son when he saw him for the first time since before his deployment. It’s so beautiful!

Reunions with soldiers that have been deployed are a huge tear-jerker and commonality on the Internet lately. Whether it’s reuniting with family or even a family pet, these videos can bring a smile to anyone’s face, and perhaps a few tears as well.

"This reunion helped a lot of us gain some prospective on incidents that occurred during our deployment. These guys are my heroes and this organization allowed some of us they may have never been financially able to drive or fly to reunite, to come together 12 years later. “ pic.twitter.com/YoZl5hnCiD

What’s even more touching about this video is that they don’t just settle on one hug… the father keeps coming back to Mason for more hugs, completely forgetting about the meeting. He actually sends his coworkers back and thanks them for their time, before embracing his son again in his third or so hug.

It’s such a touching, aww-worthy moment!

Be sure to SHARE this article if this story warmed your heart! Don’t forget to check out the full video below… get ready for the tears!

Previous article: 11 Hilarious Jokes About Shopping At Target That Are Just Too Relatable
Next Post: Grandpa And His Doggy Best Friend Dress Up As Characters From Movie ‘Up’