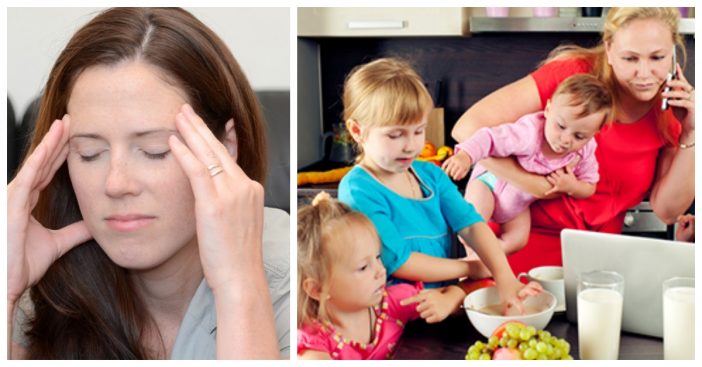 Now, most of you are probably thinking, how does a mother not stress out more after their fourth child? Psychiatrist Dr. Janet Taylor has explained that usually by the fourth child, moms typically start to relax because they’ve been through this enough times to understand what they’re in for. “There’s just not enough space in your head for perfectionism when you get to four or more kids,” she says.

Psychiatrist Dr. Janet Taylor continued to talk about how and why mothers will tend to ‘relax’ after the fourth child. “The more children you have, the more confident you become in your parenting abilities. You have to let go … and then you’re just thankful when they all get to school on time.”

Today broke down all of the most important key factors of stress that the evaluated moms have experienced:

Scary Mommy founder Jill Smokler has three children herself and notes how her level of stress spiked up when she welcomed her third child into the world.

“Going from one to two was an easy, breezy transition,” Smokler remembers, “Two to three, everything was turned upside down…  “I did not feel like I had it together … just crossing the street and not being able to physically hold all their hands I found tremendously stressful.”

Dr. Janet Taylor speaks on behalf of all moms everywhere, especially those who have four kids or more because she is also a mother of four. All of her children are now adults, but she recalls her own stress levels when her third child came along.

“You have to be able to say no to your kids, to your spouse, to your friends sometimes. Instead of making the perfect lunch for your kids, go for a walk by yourself. Even if it’s just 10 minutes, take some deep breaths and focus on what you need,” Taylor recommends, not only to mothers who are stressing with a third child but also to mothers who are stressing at all.

Be sure to SHARE this article if you found this study interesting. Don’t forget to check out the video below on 6 ways you can deal with mom stress!