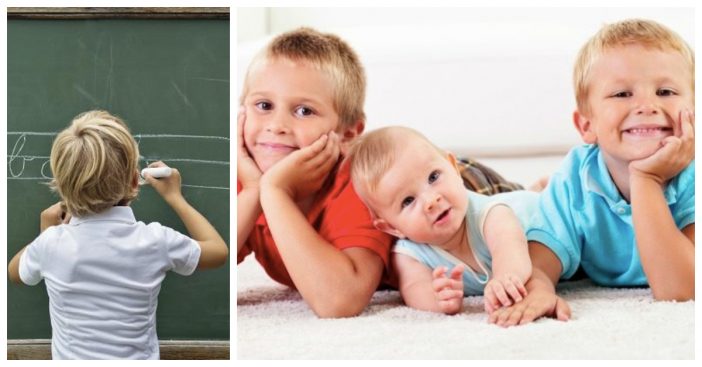 Calling all first-born children! Before you only had the privilege of being the first for everything- clothes, toys, you name it. But now you can add yet another advantage to your list. Studies have shown that first-born children are actually the smartest out of all the siblings.

This study was first published in the Journal of Human Resources, stating that first-born children may have better thought-processing skills than their other siblings because they allegedly received more mental stimulation during their early stages of development.

Researchers conducted this study by using data from the U.S. Children of the National Longitudinal Survey of Youth. They received data from 5,000 children who were monitored from pre-birth to age 14. The children were assessed every 2 years on several different categories.

This study concluded that first-born children can perform better than their other siblings as early as age 1. This could be due to the number of immediate motor skills first-borns are taught than that of the second or third-born children.

Additionally, the study concluded that parents were less likely to engage in mentally-stimulating conversation with their younger children, relating to their thinking abilities in comparison to the first-born.

Ana Nuevo-Chiquero of the University of Edinburgh School of Economics included her insight on the study in a statement. She said, “Our results suggests that broad shifts in parental behavior are a plausible explanation for the observed birth order differences in education and labor market outcomes.”

Similar to this study, other research has been conducted to inform readers about each sibling and what their advantages (or disadvantages) may be. This includes another study we reported on about second-born children and how they’re most likely to be the troublemakers of the group.

While there has been a multitude of studies conducted for first-borns and second-borns, what about the third-born? Meri Wallace LCSW actually reported on the third-born child and what they are typically like growing up. It seems like the third-born tends to be a lot more lax and easygoing than that of the first or second-born.

“The thirdborn enters a household with parents who have had years of experience in raising children, and feel more relaxed about each sniffle or diaper rash,” Wallace says, “As a result, the thirdborn is often a calmer, more easy going child. The youngest (even of two) tends to be smiley and charming and gets a lot of attention for his sunny disposition.”

Please SHARE this article if you’re a first-born child!

Previous article: Where Do Hurricanes Get Their Names From?
Next Post: Ever Wanted A Disney Princess Wedding Dress? Now You Can Have One!