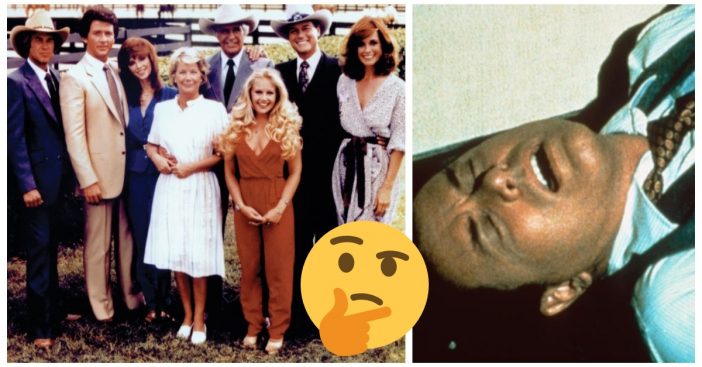 “Who shot J.R.?” is a catchphrase that everyone knows. It’s a phrase best associated with the TV series Dallas, which aired from 1978 to 1991. It mainly referred to the mystery behind the one of the character’s death’s, J.R. Ewing played by Larry Hagman. The mystery was not totally resolved until a whopping eight months later.

Having an entire eight months to process the killing of the main character gave fans a lot of time to think on some theories. This makes this episode of Dallas one of the biggest and worst cliffhangers in TV history. Were you there for it?

Do you remember how the scene took place? It featured J.R. sitting in a darkened office, drinking a cup of coffee. He heard a noise. “Who’s there?” he asked, only to be met with a resounding two bullets as an answer. He collapsed and the credits rolled. End scene. All the way from that March episode to November when fans finally found out exactly who murdered J.R., people were placing bets on who it could be.

J.R.’s wife, Sue Ellen, was the first to blame. She was drunk at the time and put in jail (of course the wife of the murdered man is always going to get the blame first). After going through plenty of theories and cases, it was revealed that Kristin Shephard, Ellen’s sister, was the one who shot him. She stole J.R.’s gun from Ellen by bribing her with liquor. She snuck the weapon back into Ellen’s closet, which would bring forth another reason to blame Ellen first.

The suspense doesn’t end there as Dallas writers had another trick up their sleeve to really shake things up. Kristin claims they can’t jail her unless J.R. wants his child born in prison. Ah, yes, the infamous soap-opera infidelity. However, Kristin soon got the hell out of Dallas and miscarried J.R.’s child. She delivers a child with her own husband before falling to her death from a balcony. Yikes.

Once Hollywood realized they could now use cliffhangers to spike interest in their viewers, the game had totally changed and it was completely due to Dallas holding off on any answers for eight whole months. CNN (which was a new 24-hour network at the time) got a huge boost from reporting potential theories and twists on the show. It changed TV forever.

So, if you’re now wondering why almost every TV show ever has a cliffhanger ending in at least one episode, now you have Dallas to thank!

Be sure to SHARE this article if you remember this timeless cliffhanger. Don’t forget to check out the clip of the famous scene below!