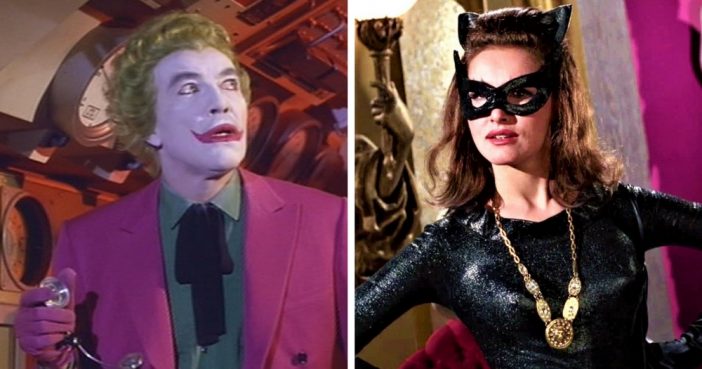 Often overlooked nowadays, after the various blockbuster films and popular animated series made of the Caped Crusader, is the 1960s TV series featuring Batman and his youthful ward Robin. Gleefully camp and colourful, it is fondly remembered (though obviously this style’s clearly not for everyone) for its catchphrases (Holy cow, Batman!), captioned fight scenes (THWACK! GLOCK! SMASH!) and cliffhangers (Will Batman and Robin survive the Penguins pernicious trap? Find out tomorrow; same bat-time, same bat-channel!).

However, the real stars of the show are the villains, always ready with an outlandish scheme to pull on the good people of Gotham, before the Dynamic Duo save the day. So sail down those bat-poles and start the Batmobile as we trawl through Batman’s rogue gallery for the best of the bat-fiends.

In The Londinium Larcenies, Batman and Robin are called to the British capital of Londinium to foil the notorious jewel thieves Lord Marmaduke Ffogg and Lady Penelope Peasoup in their plot to steal the Crown Jewels! Clad in deerstalkers (Sherlock Holmes hats) and possessing awfully posh (and just plain awful) English accents, the pair is made up of as many English stereotypes as possible; Ffogg even smokes a pipe that produces a thick fog to cover his tracks after committing a crime. Thanks to this, Ffogg and Peasoup are one of the most memorable of the one-off villains in the series.

The recurring villain Shame (a play on the classic western Shane) sees himself as a fearless cowboy-themed criminal but is actually a cowardly thief. Scared of confronting Batman in a fight, he often tries to defeat the Dynamic Duo in various sneaky ways. As one of the series best overtly comic characters, the dim-witted Shame perfectly suits the parodical nature of the series  being a parody of the classic cowboy hero himself. In an unrelated but interesting fact, in later life Shame actor Cliff Robertson won another role in a superhero series, namely Uncle Ben in Sam Raimis Spider-Man trilogy. Everyone now; With great power.

Another original for the series was the Bookworm (played by Roddy McDowall), a criminal genius who derived all his schemes from literature. Dressed in thick glasses, a hat with a reading light attached and a leather suit, the Bookworm is said to be a failed novelist who takes his frustration out by turning to crime. Does he possess a hatred for Batman  who doesnt?  attempting to kill him with book-shaped bombs. The Bookworm appeared only once but McDowall went on to play the Mad Hatter, another Batman villain who featured in the 60s show, in the acclaimed 1990s animated series which is famed for its somewhat darker take on Batman’s world. Bit different then.

A mad criminal scientist, Mr. Freeze has a vendetta against Batman for accidentally pouring a strange chemical solution over him during an arrest, causing him to develop a bizarre condition where he must stay in freezing temperatures to live. Its thanks to this series version of Mr. Freeze that he is such a prominent enemy of Batmans as originally he was a low-key villain in the comics, once called Mr. Zero, who the 60s show brought to a wider audience. Also, unlike Arnies endless ice/cold/freeze puns, this Mr. Freezes catchphrase was, oddly enough, wild! Over to you, reader, to figure out why.