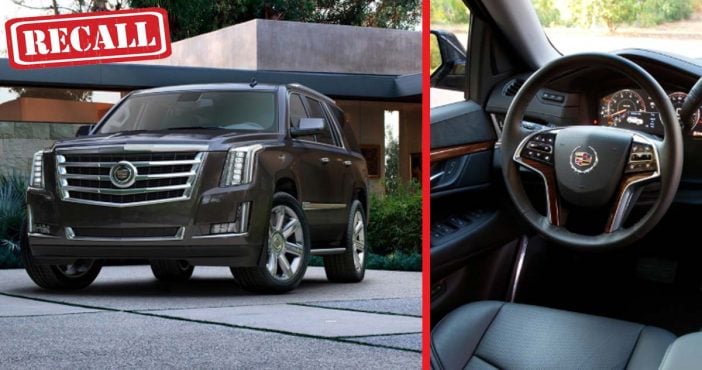 General Motors has officially recalled over 1 million trucks and SUVs due to the potential of losing the power steering. Some of the models included in the recall are the 2015 Cadillac Escalade, GMC Sierra 1500 and Yukon, and Chevrolet Silverado 1500, Suburban, and Tahoe.

The total number of vehicles affected is 1,015,918, according to the National Highway Traffic Safety Administration. A little more than a year ago about 800,000 2014-year Chevy Silverado and GMC Sierra trucks for the same reason. There have been a number of vehicle recalls for every month in the 2018 year alone.

They followed up with a potential outcome in the event the recall was not handled properly, saying, “If EPS assist is lost and suddenly returned, the driver could have difficulty steering the vehicle, especially at low speeds, increasing the risk of a crash.”

Similar to other recent recalls that have been reported, it is recommended that potentially affected customers visit the NHTSA website and input their VIN. Your car’s 17-digit VIN can often be found on the lower left of your car’s windshield, your car’s registration card, and it may be shown on your insurance card as well in addition to many other locations.

Customers may sing up to receive recall alerts about various vehicles by signing up here.

General Motors has not yet contacted the affected customers. Dealers plan to update the electric power steering module software completely for free.

Earlier this year, Ford recalled over 550,000 cars in addition to Toyota recently recalling 192,000 cars. It certainly appears that there have been a number of vehicle recalls this year and they can all be viewed here.

Please SHARE this article to spread awareness about this important vehicle recall!

Previous article: 19 Amazing Fall Festivals To Visit This Year In The United States
Next Post: Volkswagen Is Retiring The Iconic Beetle Car In 2019