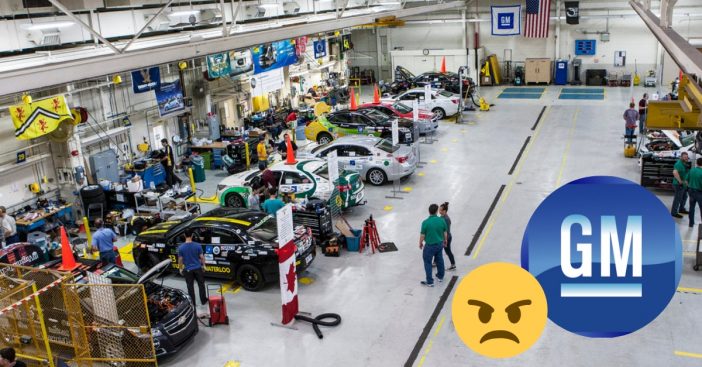 General Motors (GM) recently announced that they will be restructuring and laying off about 15% of all salaried workers, including factory workers and executives. Five plants are up for possible closures as well. GM’s new motto is “Zero Crashes, Zero Emissions, Zero Congestion” as they focus more on self-driving and electric vehicles.

The change in structure will lay off almost 15,000 factory and white-collar workers. The plants that are at risk of closing are in the United States and Canada including Detroit, Michigan; Lordstown, Ohio; Warren, Michigan; Oshawa, Ontario; and Baltimore, Maryland. Some workers may be able to transfer to other plants.

More About Why GM Is Laying Off Employees

GM is currently the largest automaker in the United States. They manufacture brands of vehicles including Chevrolet, Cadillac, Buick, and GMC brands. GM says that these restructuring moves could save them $6 billion in cash by the end of next year. The company noticed a lack of spending on certain car brands and aims to move to make more of their popular vehicles instead.

GM is focusing more on electric and autonomous vehicles and hiring people with expertise in these areas. It seems they are noticing that the industry is changing rapidly and aiming to get ahead of the curve. GM is also offering buyouts to those who are eligible for retirement. They have not announced how many people have accepted the buyouts, but it was short of GM’s target. GM will most likely have to take a pretax charge of $3 billion to almost $4 billion due to these actions.

Canada Is Not Happy About Layoffs

According to CNN, Canadian Prime Minister Justin Trudeau spoke out about GM’s actions. He said he was deeply disappointed by the decision to shut down the Ontario plant. He also said, “GM workers have been part of the heart and soul of Oshawa for generations – and we’ll do everything we can to help the families affected by this news get back on their feet.”

GM workers have been part of the heart and soul of Oshawa for generations – and we’ll do everything we can to help the families affected by this news get back on their feet. Yesterday, I spoke with @GM’s Mary Barra to express my deep disappointment in the closure.

Other plants are moving and forcing employees to move to other plants. This forces a tough decision, especially if the plants are not close to employee’s homes. Check out the video below for more on this story and how GM keeps moving employees around in Michigan.

What do you think about GM restructuring their business and laying off workers? It is always so sad to hear about layoffs, especially during the holidays!

If you found this article informative, please SHARE with your friends and family who might be affected by GM’s layoffs and restructuring!

Previous article: These Photos Of Pets Being Reunited With Their Families After Wildfires Will Melt Your Heart
Next Post: See The Full Schedule For Freeform’s ’25 Days Of Christmas’