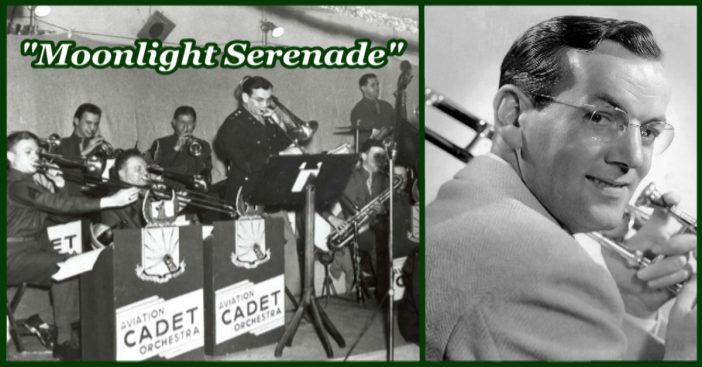 The song, recorded on April 4, 1939 on RCA Bluebird, was a Top Ten hit on the U.S. pop charts in 1939, reaching number three on the Billboard charts, where it stayed for fifteen weeks. It was the number 5 top pop hit of 1939 in the Billboard year-end tally. Glenn Miller had five records in the top 20 songs of 1939 on Billboard′s list.

This was the first biggest hit by Glenn Miller in 1939. It’s a ballad of 2 lovers who are spending a romantic night together.

With this song, Miller created a new sound with a high-leading clarinet leading over the saxophone section. That kind of sound made Glenn Miller’s orchestra famous. If you listen the song you’ll hear that there are actually 2 melodies (clarinet and saxophone), and together they’re creating the whole song.

I stand at your gate and the song that I sing is of moonlight
I stand and I wait for the touch of your hand in the June night
The roses are sighing a moonlight serenade
The stars are aglow and tonight how their light sets me dreaming
My love, do you know that your eyes are like stars brightly beaming?

I bring you and sing you a moonlight serenade
Let us stray till break of day in love’s valley of dreams
Just you and I, a summer sky, a heavenly breeze kissing the trees
So don’t let me wait, come to me tenderly in the June night
I stand at your gate and I sing you a song in the moonlight
A love song, my darling, a moonlight serenade

Click for next Article
Previous article: DYR Today, August 3
Next Post: Louis Armstrong Has Everyone, Not Just Dolly, Glowin’ and Swayin’