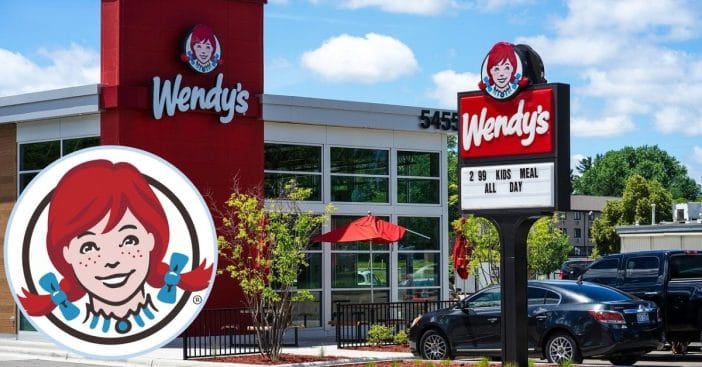 Do you see it? People claim that the secret message is to associate Wendy’s food with “mom’s cooking,” which would obviously make the restaurant much more desirable if it’s anything like mom’s cooking. Right? But Wendy’s denies this (perhaps a bad marketing decision to not just run with it and get more publicity, revenue, etc.?).

“It should not be a surprise to see the fast-food restaurant, Wendy’s associating their refreshed brand with Mom’s cooking,” reads a post on the website StockLogos. In response, a spokesperson for the restaurant said, “We are aware of this and find it interesting that it appears our Wendy cameo has ‘mom’ on her ruffled collar. We can assure you it was unintentional.”

This comes just after author Eric Schlosser claimed that McDonald’s golden arches had a “naughty” secret meaning behind them. You see, back in the 1960s, McDonald’s was in the middle of a rebrand, which means freshening up their logo as well. Schlosser claims in his book Fast Food Nation: The Dark Side of the All-American Meal that the guy working on the design—Louis Cheskin—that designing the golden arches as women’s breasts would boost sales.

Cheskin’s idea was that the design would provide some type of “Freudian significance” in the subconscious of customers. And clearly, it worked, whether the customers know it or not, because McDonald’s is still one of, if not the top fast-food restaurant internationally.

So, what do you think? Let’s get in the comments and discuss this theory behind Wendy’s logo (and if putting secret messaging behind the logo can enhance a customer’s desire to eat there).

Click for next Article
Previous article: Meghan McCain Rips Joy Behar For Comments On Her Valentine’s Day Post
Next Post: 15 Vintage Baby Girl Names That Are Making A Comeback