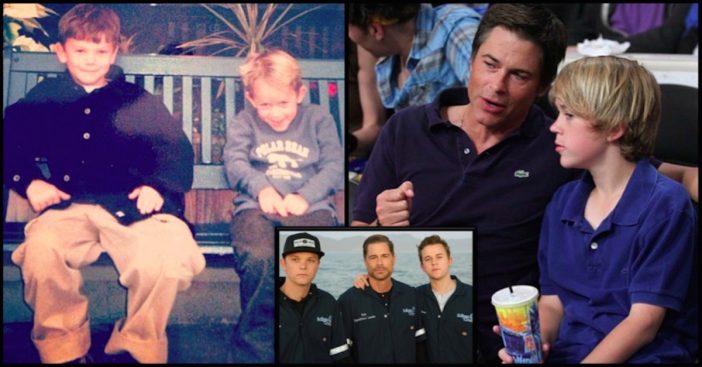 In 1983, The Outsiders hit theaters and Rob Lowe became a household name. The teenage actor went on to appear in a number of other blockbuster films, like Oxford Blues and St. Elmo’s Fire. These roles solidified him as part of the “brat pack.” One Rob Lowe’s most important roles, however, is that of a father to his two sons, Matthew Edward Lowe and John Owen Lowe. Before we make Rob blush by talking about his two very smart and handsome sons (Matthew a graduate of Duke University and John Owen, Stanford University), we’ll get back to the hunk dad himself, Mr. Lowe.

As he got older, Rob Lowe turned to television, where he starred in shows like The West Wing and Parks and Recreation. Today, Rob is still a successful television actor, and he’s currently on the CBS medical drama Code Black.

In 1991, Rob married Sheryl Berkoff. Rob and Sheryl have been together for over 25 years and their marriage seems as strong as ever.

RELATED: Actor Rob Lowe Opens Up About Taking Care Of His Sick Mother

Matthew and John are now both in their twenties, and they’re just as handsome as their famous dad. What a handsome family! 😍

Did we mention his sons were smart? Repeating ourselves like any proud parent would, Matthew Lowe graduated from Duke University in 2016, and youngest, John Lowe a Stanford University graduate!

Despite being young men now, Matthew and John are both extremely close to their parents. This quality was obviously passed down as we know how Rob cared for his sick mother. The Lowes spend a lot of time together as a family, and they always seem to have a good time.

In 2017, Rob and Lowe’s sons appeared on the reality television show The Lowe Files, in which they traveled around the country to explore unsolved mysteries. Both have also made appearances on Extra and Entertainment Tonight.

Matthew and John have both been on television numerous times, typically for interviews about their family. John also played the role of Joel Zadak on his dad’s television show The Grinder and has landed roles in other productions including A Canine Affair.

It had been unclear what Rob Lowe’s sons Matthew and John want to do career-wise, but was possible they could have acting careers like their dad! No matter what they decide to do, it’s obvious their parents will be ridiculously proud of them.

Rob Lowe’s sons are well into their respectable careers

Indeed, per his Instagram account, John Owen states, “I write/act sometimes.” That manifested in some independent projects and collaborations with his famous father. The  9-1-1: Lone Star episode “Slow Burn” featured Rob Lowe in his usual starring role as Captain Owen Strand; Lowe’s son John wrote the episode while Lowe’s brother Chad Lowe directed. John is familiar enough with the material to outline, “At the heart of the show is the unity 126 Firehouse. Watching their leader, their captain struggle is gonna lead to some intense moments. I think his journey will inform other people’s journeys and there are some really crazy stories coming in the last few episodes that when I read them on the page, I’m like, How are we going to do this?”

Congratulations are also in order for John, who is happily dating Olivia Rodriguez, a model and resident of Encinitas, California born in 2001. She has modeled for Chanel and appeared in Vogue Italia and Tiger Swim. Beautiful couple!

Matthew turned 28 in September 2021. He looks back on filming The Lowe Files as an overall fun time. “It really just felt like a fun trip we were on,” he shared, “and cameras just happened to be around.” His Instagram page is “A hot mess of dogs, outdoors and family,” sometimes all three in one photo. For instance, he and his father are posed on a boat wearing life jackets in an early September photo, becaus the family that sails together stays together! He was also there for his family’s competitive round on Family Feud, though according to him, “You would never know that I went to Duke and graduated Law School from my performance last night.”

He’s got the dedication to get his dogs posed for the perfect holiday picture, though, and that’s really what’s most important. Oh, and he also boasts a career in law. ILuminary Worth reports that he worked as a Summer Law Clerk, then at the Los Angeles-based Russ August & Kabat. Other workplaces include Colony Capital Inc, Constellis, and Irell & Manella LLP.

Did you know Rob Lowe’s sons were so grown up? If you love Rob Lowe, don’t forget to share this article with your friends! Ready for more? Check out John Stamos with his son wearing matching Elvis Outfits!