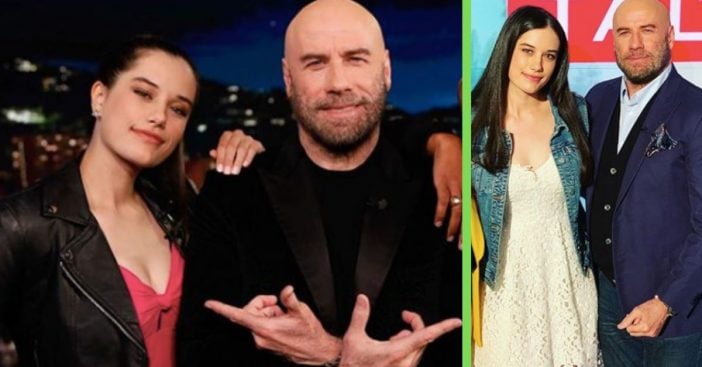 John Travolta’s daughter, Ella Bleu, always kind of knew she’d follow in the footsteps of her famous parents and delve into the acting business. At 19 years old, she is doing just that! “Since I was very little, I’ve loved performing, singing, dancing and putting on shows at home for my family and friends,” she told PEOPLE magazine.

Even when Ella was a little girl, her homespun plays were mandatory for her parents to attend. “In our house in Maine we have this stage area set up with a little red curtain and my friends and I would perform there…We did (everything), from the Hulk to Christmas shows and one year we all played different ‘Housewives of Maine,’” Ella explained.

Ella Bleu had a small role in 2009 in a film called Old Dogs and in 2019, she took on a role in a film called The Poison Rose, a noir thriller, starring both her father and Morgan Freeman. Ella’s dad helped her prepare for the role, a young widow, after she turned to him for advice. “It helped so much having my dad there,” she said, “It was so comforting and he’s the best mentor ever.”

Ella’s famous mom, Kelly Preston, was also a go-to and a huge help for Ella Bleu, a blossoming actress. “When I have any questions, my mom and dad have the best advice, and that’s amazing… I love that it’s sort of the family business!” Ella once said. Sadly, Kelly passed away in 2020 after a long battle with breast cancer.

Ella was also asked what her favorite movies are from her parents’ respective repertoires. “Oh my gosh, all of them are absolutely amazing, so that’s really hard (to pick), but some of my top favorites of my dad’s are From Paris with Love, and obviously Grease,” Ella says. She also says she counts Cat in the Hat and What a Girl Wants as some favorite movies of Preston’s.

Ella says she’s eternally grateful for having a set of awesome parents that would be proud of her no matter what path she chose in life. “Whatever I would have chosen to do they would have supported me, but they’re really proud of me for (acting)…and that makes me proud, too!”

Ella now has her own Instagram account, which will be documenting her acting journey! She seems so down to earth. These days, she has a film called Get Lost in pre-production too.

Click for next Article
Previous article: A ‘Waltons’ Reboot Is Happening And One Original Star Has Been Cast
Next Post: Clint Eastwood’s Granddaughter Graylen Is Now Acting And Looking Just Like Granddad