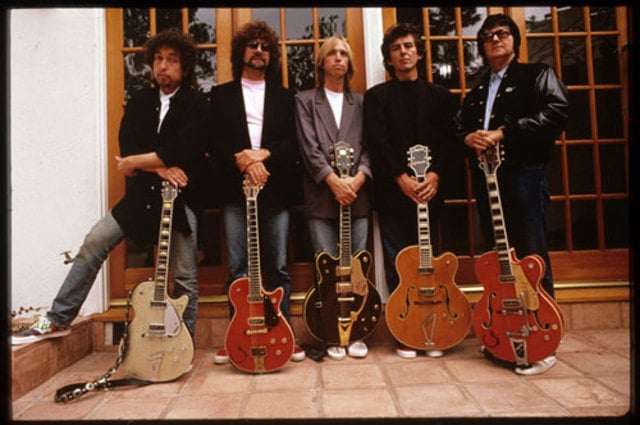 A supergroup is when members of other highly successful bands and groups join forces to make a dynamic impact onto the music scene. Mostly used for rock and pop groups, it can also be said that The Three Tenors is a supergroup.

Do you remember all of these incredible supergroups?

When Wilburys unite, we all win.

Their unique psychedelic blues rock was an immediate hit, but they broke up just three years later.

The lineup was so impressive that Led Zeppelin signed them to their own record label, Swan Song.

One more from my favorite supergroup..

That’s right, not only are they amazing musicians, they’re also amazing tricksters.

After the breakup of Cream, Clapton and Baker formed Blind Faith with Steve Winwood (Traffic, Spencer Davis Group) and Ric Grech (Family). They released one album in 1969, which featured classic rock radio staples “Can’t Find My Way Home” and “Presence of the Lord.”

In 1982, former members of prog rock bands Yes, King Crimson and Emerson, Lake & Palmer came together to form Asia, who hit it big with “Heat of the Moment” and “Only Time Will Tell.”

In 1968, David Crosby (The Byrds), Steven Stills (Buffalo Springfield) and Graham Nash (The Hollies) formed a new band. They quickly became a creative powerhouse (except when it came to choosing a name for the band).

When Neil Young joined the band in 1969, they naturally changed the name to Crosby, Stills, Nash & Young, making them the most popular group that can also be mistaken for an accounting firm.

Instead of picking a name that sounds like an accounting firm, Led Zeppelin’s Jimmy Page and Bad Company’s Paul Rodgers simply called their 1984 supergroup The Firm.

Rodgers particularly loves forming supergroups, as he also teamed up with Brian May and Roger Taylor of Queen for the aptly named band Queen + Paul Rodgers.

After Rage Against the Machine broke up in 2000, members Tim Commerford, Tom Morello and Brad Wilk formed a new band with former Soundgarden vocalist Chris Cornell.

Songs like “I Am the Highway” and “Like a Stone” (videoed above) dominated rock airwaves, but they broke up after three albums in 2007.

John and Andy Taylor of Duran Duran and singer Robert Palmer formed The Power Station in 1984. And just in case that combo feels like it’s almost too ’80s, they also added some ’70s flair with former Chic drummer Tony Thompson.

Damn Yankees formed in 1989 with Tommy Shaw from Styx, Jack Blades from Night Ranger and Ted Nugent from being Ted Nugent.

With Josh Homme (Queens of the Stone Age) on guitar and vocals, John Paul Jones (Led Zeppelin) on bass and keyboards, and Dave Grohl (Foo Fighters, Nirvana) on drums, Them Crooked Vultures released their first album in 2009 and won a Grammy for their song “New Fang.”

They’ve announced plans to release a follow-up, but no word on exactly when that will be.

A few years before The Traveling Wilburys came to be, country music had its own ultra-supergroup called The Highwaymen. Formed in 1985, it consisted of Willie Nelson, Johnny Cash, Waylon Jennings and Kris Kristofferson.

Which is a pretty solid lineup…you know, if you’re into legends. Let’s do one more clip from this absolutely incredible supergroup..

First off, let’s meet the ladies who are new to the supergroup ‘group’: The Highway Women.

The supergroup is composed of Brandi Carlile, Natalie Hemby, Maren Morris, and Amanda Shires. Give them a listen below and I’m sure you won’t be disappointed. Their vocals and talent is quite impressive.

I have been a fan of Brandi Carlile for a while now, her voice is strong and reminds me of the ’70s powerful female vocalists.

The Music From This Inspiring Movie “Rocks”!