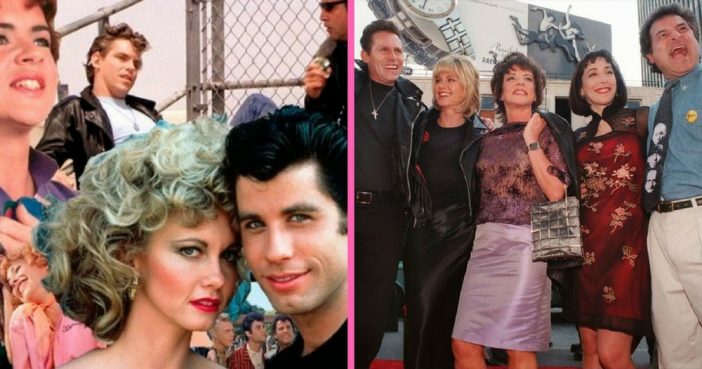 It has almost been 40 years since one of the greatest movie musicals, Grease, hit theaters. Let’s take a look back to when the film first released in 1978 and see what those Rydell High students have gotten up to these last few decades!

Time has been kind to John Travolta’s career, but not his personal life or looks. Since Grease came out in 1978, Travolta has been insanely busy, some of his most notable works being Vincent Vega in Pulp Fiction, Sean Archer/Caster Troy in Face/Off, and when he donned a fat suit to play Edna Turnblad in Hairspray!. Most recently, he’s known for an epic mix-up of Idina Menzel‘s name at the 2014 Oscars and a lot of public speculation into his sexuality. His personal life aside, he’s currently on the new hit show American Crime Story and will voice Gummy Bear in Gummy Bear the Movie.

By the time Grease came out, Olivia Newton-John was already a well-known name. Since then, besides playing the most notable goody-goody, her music career blossomed, even more, having released 15 albums post-Grease, the most recent being the 2012This Christmas, which she sang on with John Travolta. In 2014 she had a residency at the Flamingo Las Vegas and in 2015 she was a guest judge on RuPaul’s Drag Race.

Stockard has been putting in work since her days as Queen of the Pink Ladies, Rizzo. She was the First Lady on The West Wing, Aunt Frances in Practical Magic, and Ouisa Kittredge in Six Degrees of Separation (which earned her an Oscar nod). More recently she’s been Veronica Loy on The Good Wife. You can currently find her on the Broadway stage in It’s Only A Play, which opened in the fall of 2014 with her, Rupert Grint, Megan Mullally, Nathan Lane, and Matthew Broderick.

Unlike some of his co-stars, Barry Pearl’s career did not really take off after Grease. However, he did find some success in children’s theater and as a television actor, playing Professor Tinkerputt in Barney’s Imagination Island. He’s had guest spots on Even Stevens, Baywatch, Criminal Minds, and House, M.D. Most recently, he was part of the series Summer with Cimorelli.

Tucci found a lot of work on TV after Grease. He was on Trapper John M.D.,  The Paper Chase, It’s Garry Shandling’s Show, Flying Blind, and had a long stint on Diagnosis Murder as Norman Briggs.  He played Dr. Bay in the 2001 film Blow with Johnny Depp. We saw him recently in The Heat and he will appear on the new show The Comedians, starring Josh Gad and Billy Crystal.

Until 2015, Kelly Ward hadn’t been in front of a camera since 1986. But he been busy, working behind the scenes, beginning as a story editor and working his way up to dialogue director on several different productions over the years, such as: Back to the Future the TV series, The Pink Panther the TV series, All Dogs Go To Heaven, and more recently Jake and the Neverland Pirates. This year he was on the show 7D.

Click “NEXT” to see what the “Beauty School Dropout” looks like and the members that are sadly, no longer here (RIP)