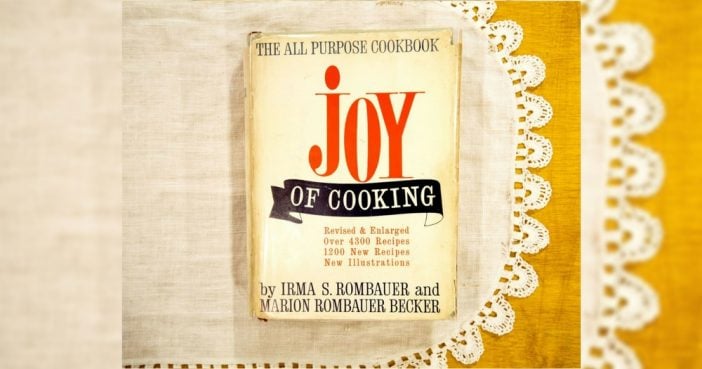 Dust off your old books and look for the skinned squirrel!

“The advice given to new owners of the Joy of Cooking is to locate the illustration of a skinned squirrel. This, say the knowing, is the mark of a good edition. The squirrel—shown pinned by a boot as gloved hands relieve it of furry hide—is one of the many myths surrounding the book. But the truth is, the squirrel is probably just in the copy you grew up with, whose pages and recipes are as heavy with nostalgia as they are old dough.”

“After 85 years—eight editions, 1,132 pages and 4,500 recipes—The Joy of Cooking is as important for a well-stocked cupboard as flour and sugar. Which is why each copy, like the text itself, feels personalized and special. And why, even though the world is full of perfectly decent and functional How to Cook Everythings, the Joy is the one that continues to get handed down, generation to generation. But which edition is actually the best is highly subjective.”

“I don’t consider anything after 1975 to be Joy of Cooking ,” said Bonnie Slotnick, owner of the iconic “out-of-print and antiquarian” cookbook store in New York City. Every couple of weeks Slotnick sees someone examining one of the copies she has on the shelf, sometimes asking a question about a specific edition. If they’re looking for a copy of the Joy—as it’s casually referred to by aficionados—to give as a gift, usually the copy that the gifter is after is the one his parents had.”

“The book’s history begins with Irma Rombauer. She was in mourning after her husband’s suicide. It was the Depression, she had barely any savings and no career. To cope with grief, and attempt a living, she decided to make a cookbook. At that point, Rombauer was not known as a cook. “Worst idea I ever heard of,’ was the consensus,” writes Anne Mendelson, quoting Rombauer’s brother’s family in Stand Facing the Stove, the biography of Rombauer and her daughter, collaborator, and Joy illustrator Marion Rombauer Becker. “Irma’s a TERRIBLE cook,” they concluded.”

“But Rombauer knew how to host, and, she discovered, she knew how to write. The first copy of the Joy, a collection of recipes from friends and family was self-published in 1931 at 395 pages, using a huge chunk of what was the last of the family money—3,000 copies for $3,000. Today you’d be lucky to get just one of that original printing for the same amount of money.”

“There are a few notable divisions in edition Joy-ist loyalty. There are the Irma v. Marion camps, for one. When Irma Rombauer fell ill, and then after her death in 1962, Marion Rombauer Becker revised alone, and (among myriad other complaints), some say, just couldn’t replicate her mother’s wit.”

“The hunters of vintage copies, the ones their parents or grandparents had—the good old days of Jell-O salad, tuna casserole, canapés and cocktails—end up in shops like Bonnie Slotnick’s.”

Click To Read Bon Appetit’s FULL Story: The Obsessive Sport of Shopping for a Vintage ‘Joy of Cooking’