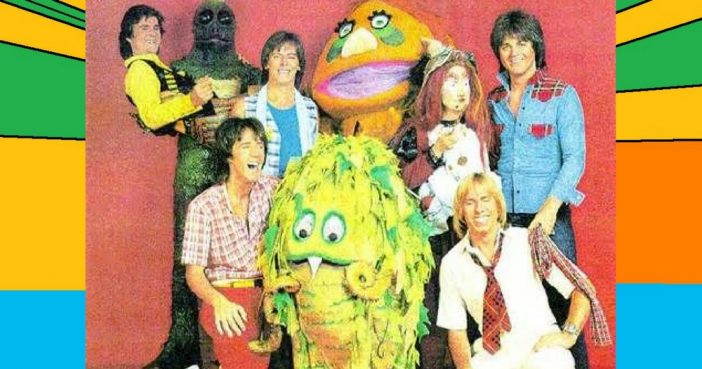 We can thank the famous Krofft Brothers for the weird, psychedelically-infused TV shows that we got up to watch every Saturday morning. Originally vaudeville enthusiasts, these two brothers were the brains behind the character designs of Hanna Barbera’s Banana Splits. After getting that foot in the door, the two Sid and Marty Krofft would eventually stamp their own brand name on some of their own television shows… And BOY were they weird!

Debuting in 1969, this show is known as the first live-action puppet-based television program. The show is about the adventures of a shipwrecked little boy who is trapped in a trippy, colorful land with a dragon friend (who is the mayor and the show’s title, H.R. PufnStuf) and a witch enemy. You can learn about the show’s whole entire premise in its wacky theme song, below:

The following year in 1970, the two brothers would move on to make their next weird show. They labeled this as the British version of the hit television show The Monkees. The main characters were teenagers who were part-bug… Yes I am just as confused as you are. They are always harassed by a witch named Benita Bizarre… Again, I’ll leave the rest of this explanation up to the theme song.

This crime fighting duo become stars after moving to Hollywood. Electra Woman enjoys the fame, fortune and the attention of every boy in town, but Dyna Girl disagrees and is constantly wonders what price they will have to pay for their recently awarded stardom… There was also a live action film made in 2016 that was an adaptation from the television show’s concept.

Wonderbug is, to put in simple terms, the adventures of a living dune buggy that is able to transform into a superhero car. Was this a straight up rip off of Herbie, or vice versa? You tell me.

So basically three teenagers find themselves stranded on a remote island which is inhabited  by the sinister Dr. Shrinker and his strange dwarf assistant, Hugo. Shrinker tests his super cool shrinking ray on the teenagers. And it is up to them to find a way to regain their normal size while trying to stop Shrinker from using his ray on the rest of the world!

When three teenagers (there seems to be an ongoing theme, here) Donald, Lorraine, and Kristy find an old bottle. After rubbing it, they discover the bottle is actually the home of Mongo, a genie. Mongo’s strange attempts to help his young masters lead to many weird, uncanny wild goose chases. In order to work his magic, Magic Mongo would do this weird thing with his ears and made a funny face. Weird.

Bigfoot finds a young kid who is lost in the vast wilderness of the American northwest (where the hell are his parents?). Bigfoot raises the boy as his own and he calls him, simply, Wildboy. Now, 8 years later after their first encounter, they fight crime and terrestrial beings who intrude upon  their forest home.

A youngster named Mark sneaks his way to the backstage area at a magician’s show and somehow falls into a gigantic top hat. This hat is apparently a gateway to another universe (no, not Hell) where all the land dwellers are talking, vagabond hats. The evil magician tries to kidnap Mark, while Mark and his hat buddies try to find a way to get Mark back to Earth!

The Krofft brothers had a weird and strange run in the 70’s, producing shows (which would eventually evolve into their own variety show) for us kids. What we didn’t realize back then was how freaking weird these concepts were. Who knows, maybe we were just eating one too many candy cigarettes…

Are there any super weird television shows you remember from your childhood? Tell us in the comment section below!