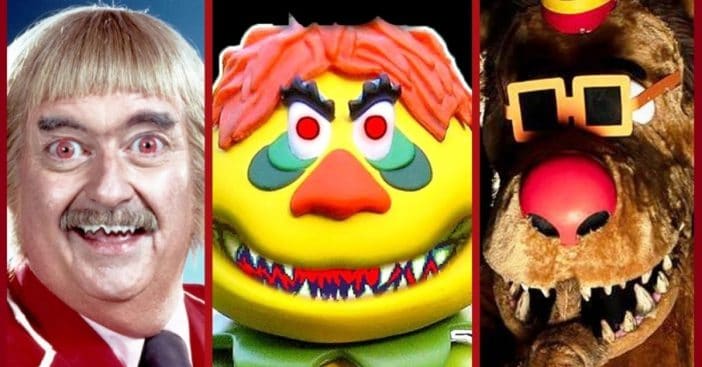 There’s nothing on TV as varied in scope as TV shows aimed at kids. Children have the best imaginations in the world, so show creators are able to push the limits on creativity and still have a willing audience. A green clay man who’s best friends with a talking pony? Kids ate Gumby up. Young adult reptiles who eat pizza and fight crime? Teenage Mutant Ninja Turtles was a smash hit. But being able to basically create anything your mind can dream up and have kids love it can sometimes be a slippery slope. Because it’s not that far from incredibly inventive to really kind of creepy. And in the 1970s kid’s show creators strayed into the realm of creepy a bit too much.

Today we’re going to be delving into some of the creepiest shows for kids the 70s produced. Now, let’s get creeped out together!

Might as well start off with the grand-daddy of all creepy kids shows. H.R. Pufnstuf was created in late 1969 by Canadian brothers Sid and Marty Kroft – more on them later – and wow was the show wild. Just listen to a quick plot summary: Eleven-year-old boy Jimmy and his friend the magical talking flute Freddy get stranded on Living Island due to the evil witch Wilhelmina W. Witchiepoo, who rides around on the Vroom Broom and wants to take the boy prisoner and have the magical flute all to herself, probably to play a little Jethro Tull. Fortunately, Jimmy and Freddy take refuge in the cave of H.R. Pufnstuf, the mayor of the island. Pufnstuf is ostensibly a dragon but looks more like a cob of corn cracked out on LSD. Everything on Living Island is, of course, alive, allowing Jimmy and his friends to get into all sorts of crazy adventures. The show was also filled with psychedelic colors and giant unwieldy puppets that struck awe and occasionally terror into the hearts and minds of kids everywhere. Creepy, but we loved it anyway! And Witchiepoo’s cackle alone deserves to be sampled for generations.

Clowns are very divisive. For some kids, they’re wacky entertainers, yet for others, they’re the stuff of nightmares. And Bozo the clown best epitomizes this! Introduced to kids in 1949, and remained on the air for decades, including all throughout the ’70s. With flared bright orange wingtip hair, wide eyes, and always sporting a giant, some might say sadistic, painted on smile, Bozo either inspired joy or terror. There was no middle ground. Unlike other popular kid’s shows, Bozo was franchised rather than syndicated, which meant that every local market could put on their own production with their own Bozo. So at any given time, there wasn’t just one creepy clown out there. There literally could have been dozens at any one time, all slightly different. But despite the pure fear inspired by Bozo in some children, most kids found his antics irresistible, and generations of kids loved him.

In a world devoid of humans but populated by intelligent, articulate chimpanzees, who could possibly save the world from the clutches of the evil Baron von Butcher? Super spy Lancelot Link, of course, the main character in the early ’70s, incredibly weird, kinda creepy kid’s show. The show was basically Get Smart but with an all-chimp cast – chimps that could drive cars, play in bands, and poorly perform Shakespeare. And if that wasn’t bizarre enough for you, the show’s dialogue wasn’t even scripted. In a desperate attempt to make the chimps’ mouth movement match their words, the writers ad-libbed the dialogue on set, leading to absurd moments where the chimps would break into song or start reciting nursery rhymes in the middle of sentences, so it matched and made for quality TV. Which definitely added to the creepiness factor. But while we might look back at Lancelot Link and cringe a bit today, kids sure did love it back in the day.

With a name like Gigglesnort Hotel you just know you’re in for a, uh, slightly unusual kid’s show. The program followed the wacky adventures of Bill James, the front desk attendant at the eponymous hotel and the only actual human in sight. Every other character, both residents and other staff members, was a puppet – and each one was more bizarre than the last. Dirty Dragon, the Old Professor, Old Mother Plumtree, sometimes it seemed like the show’s creators were trying to out-weird each other. But it was The Blob which for me turned this loveable cast of characters into a creepier direction. Looking like an alien potato that had taken one too many blows to the head, The Blob was a terrifying piece of poo come to life, hopefully not to steal our souls. Despite the obvious creepiness of some of its characters, Gigglesnort Hotel received rave reviews from parents and kids alike, and delighted kids everywhere for three seasons.

Mark falls into a magician’s hat and gets transported to the magical realm of Lidsville, a land of living hats. The hats on the show have the same characteristics as the people who would normally wear them, so a cowboy hat would talk like a cowboy, a safari hat like a South African on safari, and so on. The show was the third brainchild of the Krofft brothers, already mentioned for H.R. Pufnstuf. And they hadn’t lost their ability to make fantastic, bizarre, and creepy kid’s shows. Mark is forced to team up with the headwear and a genie named Weenie to thwart the evil plans of magician Horatio J. Hoodoo. And Weenie is played by Wichiepoo herself, the great Billie Hayes. Who deserves a big thank you from all 70s kids, as Hayes recently passed away in April 2021. The show’s humor mainly stemmed from hat-related puns, and as much as I love a good pun, after the Hat Trick, that grows stale pretty quickly. Lidsville, just like HR., only lasted for one season, but this seemingly mushroom-induced dream lived on far longer in the mind’s eye of anyone who saw it.

‘Sigmund and the Sea Monsters’

With two seasons originally airing from 1973 to ‘75, Sigmund was produced by… you guessed it, the infamous Krofft brothers. It told the tale of Sigmund, a young, friendly sea monster who gets kicked out of his house for refusing to scare people. He befriends two kids, Johnny and Stuart Scott, who hide Sigmund in their clubhouse. Generally, Sigmund would do something silly, attract unwanted attention, and the two boys would have to hide their friend from his mean older brothers, Burp and Slurp, who along with Sweet Mama Ooze, and Big Daddy Ooze are horribly abusive to poor Sigmund. They constantly belittle him, and this verbal abuse becomes physical all too often. And if you look at Sigmund and the Sea Monsters as the story of a young child trying to break free from his abusive family, creepiness starts creeping in. That didn’t stop countless kids from laughing along to the antics of Sigmund and co. of course, and the show remains a fond memory for many.

Slim is a fictional character created by John Burstein to teach kids about how the body works. He wore a skin-tight unitard with various tissues, organs, and organ systems painted in biologically accurate sizes and locations. Sounds like a great idea! Unfortunately, the execution was off just enough to make it all a bit creepy. Now I’m all for education, but did it have to come from someone who looked like the flayed victim of some terrible medieval torture? Seeing Burstein with all his organs out was a little too realistic, and it was honestly super creepy. And although Burstein did rock a pretty sweet afro, when I said skin-tight unitard, I meant skin tight. So not only were we treated to Slim Goodbody’s internal organs, we got a pretty good view of Burstein’s external organ too. The show lasted for years and thousands of kids learned about their own bodies from Slim Goodbody.

And there you have them. Some of the creepiest, weirdest, most far-out kids shows of the 1970s. Do you remember watching any of these? Which creepy shows did we forget about? Did we drag any of your favorites? What kind of hat would you be in Lidsville? Let us know in the comments below, we read every one!

Click for next Article
Previous article: Jamie Lee Curtis Speaks Out About The Dangers Of Plastic Surgery From Her Own Experience
Next Post: Original ‘Jeopardy!’ GOAT Ken Jennings Gives Shoutout To New Champion Matt Amodio