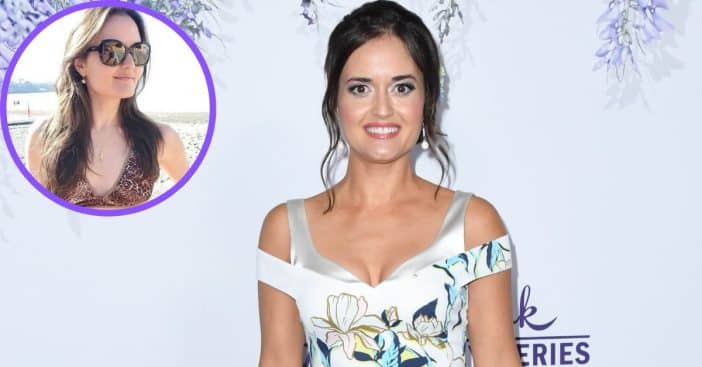 Even though autumn is turning the air crisp in most of the country, Danica McKellar managed to turn up the heat in a sleek bikini photo shared to her Instagram. The picture in question is actually a throwback photo from when she was 45. Now, the 47-year-old is provoing your wonder years are never really over.

From 1988 to 1993, McKellar was known as Winnie Cooper, girlfriend to Kevin Arnold in The Wonder Years. The coming-of-age dramedy recently saw the release of a modern reimagining of the series released on ABC, but there was another occasion McKellar was celebrating: National Beach Day.

August 30 celebrates those sandy stretches of land overlooking the ocean, bathed in sun and salt. This is what McKellar celebrated with her bikini-clad photo shared for the fun day. Oh hey, #NationalBeachDay,” she captioned her post, which shows McKellar with her hair down, framing a face covered by large square sunglasses, all while she’s dressed in a leopard-print bikini top and a dark bathing suit bottom.

Her post continues, “This is from my 45th birthday… I hope your week is going great so far! Here’s a big hug to your heart – yes, every one of you!!” By time of writing, the post has received over 22k likes from her 650k Instagram followers and fans.

That may have been a throwback photo from birthday number 45, but jumping to present day, at 47, things are still wonderful for the former Wonder Years star. She’s a Christmas movie star with yet a new film for GAC set to release on Thanksgiving weekend, this one called Christmas at the Drive-In. She doesn’t always act, though; in fact, she took a break to pursue a very different but important and personal passion: education. During her years at UCLA, everyone would greet her as Winnie Cooper. “I couldn’t get away from it. So I needed to find out how I was valuable outside of Winnie Cooper, and math was challenging and I did well at it” she explained.

So, she penned a series of math books to make the subject less intimidating. “And I love this feeling that my value, the important stuff had nothing to do with how I looked or television,” added McKellar. Her 11th book is Double Puppy Trouble and is subtle in its education because it “sneaks in a little bit of math. Kind of like putting ground up vegetables in brownies. So, they’re getting that fun association with math, or learning a little bit of math, and really- it’s helping to take down some of the math anxiety that we’ve been seeing building up over time especially because of the pandemic and kids not being in school in-person.”

Click for next Article
Previous article: ‘M*A*S*H’ Star Jeff Maxwell Talks About Meeting ‘Passionate’ Veterans
Next Post: Meghan Markle Allegedly Wanted To Be The ‘Beyoncé Of The UK’ When She Married Harry