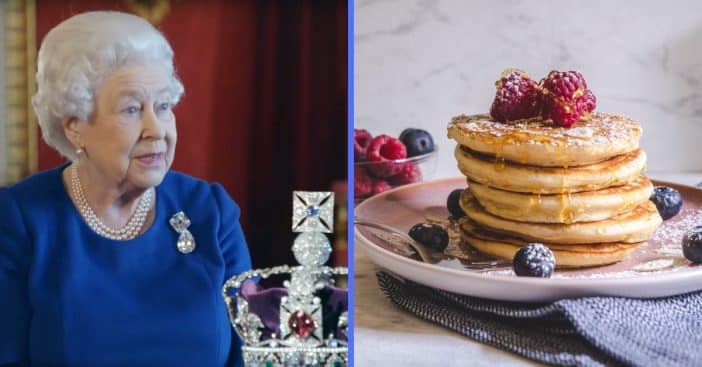 Britain’s royal family is often surrounded by an aura of regal detachment from everyday life and it’s difficult to imagine members doing regular day-to-day things. But Queen Elizabeth II had been a part of bringing the image of the royal family into a more transparent place; her coronation was the first to be fully televised and now documentaries abound with interviews one-on-one with royalty. Although plenty of strict protocols persist, the royals could be seen doing some relatable, mundane tasks. In fact, Queen Elizabeth had a favorite pancake recipe to start the day off right. Thanks to some astute archivists, everyone can learn the queen’s favorite recipe too.

Reportedly, Queen Elizabeth had this trusty pancake recipe and gave it to President Eisenhower in 1959. Having lived to the age of 96, Elizabeth II, born in 1926, watched a revolving door of historical figures come and go before her own recent passing. In the wake of her death, Britain is still in a period of national mourning and people around the world are remembering the monarch in their own ways. As a result, information like her cooking recipes and other personal details have resurfaced. Let’s see how to make pancakes fit for royalty.

Online, pictures are popping up to remind the world of the queen’s favorite recipe for pancakes. It takes the form of a picture titled Menu, with the food locally called drop scones. There is a line for the date to be written but on the yellowed paper, it is left blank. They’re called scones, but the “dropped” is an important distinction, since they are made by cooking a dollop of the mixture, which makes them more closely resembling the food’s other name, Scotch pancakes.

The recipe reads as follows:

Beat eggs, sugar and about half the milk together, add flour, and mix well together adding remainder of milk as required, also bi-carbonate and cream of tartar, fold in the melted butter.

In handwritten letters is the note, “Enough for 16 people.”

Everyday habits were as simple as the queen’s recipe

A review by Jen Adams on BuzzFeed says the queen’s pancakes “somehow taste way better than American pancakes,” making them definitely worth a try. While she definitely had a lot of routines that show her royal station, the late monarch also had some relatable habits, right down to enjoying the same food almost every day. Sometimes a few details changed, but the queen could be content with something as simple as bread, butter, and jam.

Queen Elizabeth stayed very active throughout her reign, starting from her highly-publicized coronation in June 1953 and through 70 years of rule until her death on September 8. It was only very recently she started attending meetings more and more over Zoom instead of in-person, and now she has been laid to rest in St. George’s Chapel at Windsor Castle.

Will you be trying this recipe? Tell us how you liked it!

Click for next Article
Previous article: Serena Williams Says ‘Never Say Never’ About Returning Back To The Court
Next Post: ‘NCIS’ Season 20 Kicks Off Without Mark Harmon In Opening Credits