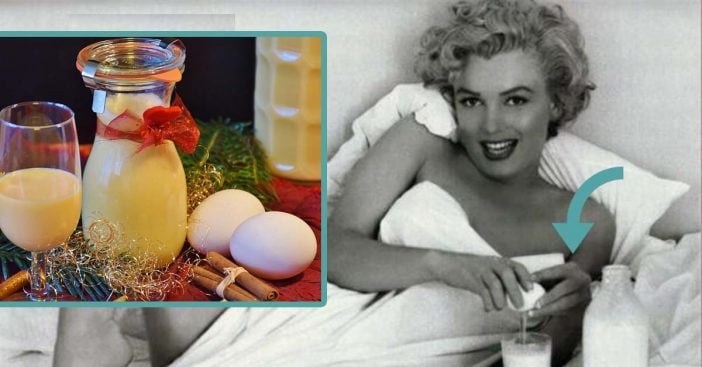 Marilyn Monroe was one of the most recognized and dominating actresses of the film industry back in the ’50s. She was known to be the most prominent sex symbol of that time period, remembered best for her short platinum blonde hair and soft-spoken nature every time she opened her mouth. She was one of the top-billed actresses for an entire decade, and deservedly so!

What even the most diehard Marilyn fans might not know is that she had a breakfast routine that many people thought was bizarre back in her time, even though she was known for her home recipes as well. In a 1952 interview, she detailed what her daily breakfast was and, we have to say, it’s pretty interesting!

Check out what Marilyn had to say about her breakfast routine… would you eat/drink this?

“Before I take my morning shower, I start warming a cup of milk on the hot plate I keep in my hotel room. When it’s hot, I break two raw eggs into the milk, whip them up with a fork, and drink them while I’m dressing. I supplement this with a multi-vitamin pill, and I doubt if any doctor could recommend a more nourishing breakfast for a working girl in a hurry.

There’s no denying Marilyn was an incredibly voluptuous female and was absolutely stunning in face and in figure. Could all that protein play a role in it? Many diehard Marilyn fans would assume she’d opt for a fancier first meal of the day or perhaps something lighter/healthier like fruit.

We can’t even deny her opting for a protein-filled meal though, as protein can help you feel fuller longer. This woman was always on the go, so it made sense to be as filled up on food as possible before starting the workday.

Despite this being a thing back in the 50s, many modern-day fans of the bombshell actress can’t help but ask their own questions about her breakfast routine. Why drink eggs when you can eat them instead and what about salmonella? This breakfast probably wouldn’t fly these days with things such as harmless romaine lettuce being recalled time and time again.

However, for those looking for protein-packed meals to start your day, or at any time of the day, you might be interested in looking into Marilyn’s sworn-by routine. Check out the photo below of Marilyn making her little breakfast concoction, in action!

Be sure to SHARE this article if you’d try Marilyn Monroe’s breakfast!

Check out this video below of a woman actually trying Marilyn Monroe’s breakfast drink (she actually recommends it):

Previous article: Oprah Winfrey Slated To Interview Michael Jackson Accusers
Next Post: Things People Did In The ’60s And ’70s With Their Kids They Could Never Get Away With Today