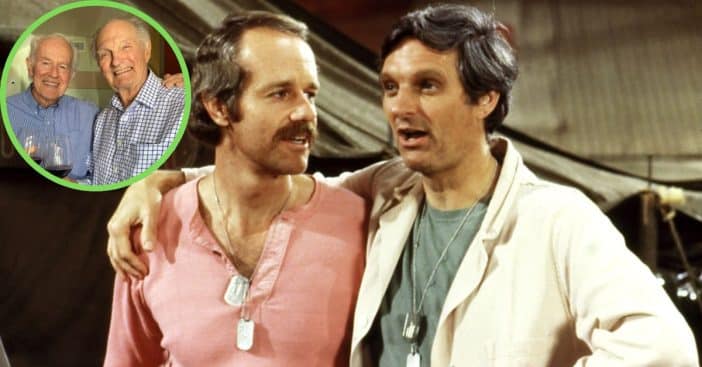 It was a union of comedy and drama, humor and tragedy, and this year marks the 50th anniversary of this revolutionary series known as M*A*S*H. In celebration of this occasion, series stars Alan Alda and Mike Farrell reunited on Saturday to give a big toast to the show that impacted so many – including each other.

Fans said “Goodbye, Farewell and Amen” in February 1983. Before its end, M*A*S*H introduced audiences to an ensemble cast of colorful characters, from Alda’s smart-mouthed Hawkeye to Farrell’s family man Hunnicutt. This weekend, Alda and Farrell met up not in a doctor’s tent but at a restaurant and shared a moment that has fans remembering why M*A*S*H has such unbeaten TV records to its name.

Mike Farrell and I today toasting the 50th anniversary of the show that changed our lives – and our brilliant pals who made it what it was. MASH was a great gift to us. pic.twitter.com/FGd8ZwBgIq

On September 17, Alda took to Twitter to share a post of himself and Farrell together again. Fans first saw them in M*A*S*H when Alda and Farrell were in their early thirties and today, they are 86 and 83 respectively. In the picture, they are seen standing arm-in-arm in formal attire with their drinks raised for a toast.

“Mike Farrell and I today toasting the 50th anniversary of the show that changed our lives – and our brilliant pals who made it what it was,” Alda captioned the post, which by time of writing has received over half a million likes/ “MASH was a great gift to us.”

The numbers check out

M*A*S*H was certainly a gift to Farrell and Alda, but also to many others as well, evidenced by the historic numbers it drew. From 1983 until 2010, the finale was the most-watched television broadcast in U.S. history and to this day remains the most-watched finale on TV. It’s also the most-watched episode of any scripted series. The genre of dramedy, a hybrid of comedy and drama, was given a solid foundation thanks to M*A*S*H, about the best representation any genre could ask for, since it is still one of the highest-ranked shows on American television to this day.

Part of its success is the reality that drips from every episode. That is in keeping with the aim of entire franchise. It all began with the book MASH: A Novel About Three Army Doctors by H. Richard Hornberger under the pen name Richard Hooker. Hooker had served as a military surgeon and experienced life practically on the frontlines. When the book was adapted first into a film then a show, Hawkeye became a vehicle for showing an intimate look at the horrors of war. Reality really is more remarkable than fiction and gave M*A*S*H unprecedented staying power 50 years later.