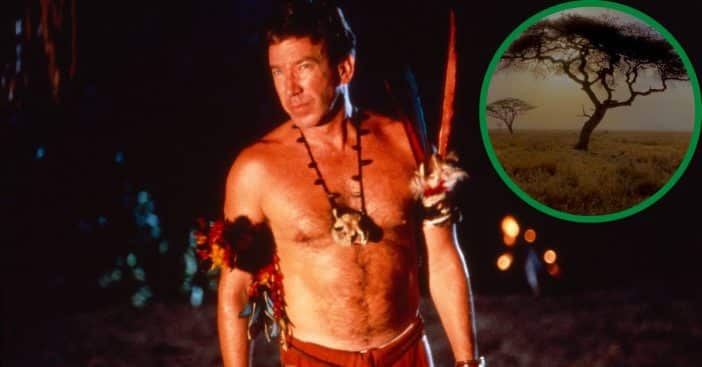 Though Tim Allen is known especially for his eight seasons on Home Improvement, he quickly added “more power!” to his filmography with numerous films. Among these, The Santa Clause remains a holiday classic – but one became a cult classic after the fact. Devoted fans of Jungle 2 Jungle dared to hope their favorite might be getting more attention in the near future.

That’s all thanks to a scenic photo Allen shared to his social media earlier this week. Produced by Walt Disney Pictures, Jungle 2 Jungle was released in 1997 and tells the story of a man who learns he has a teenage son who was raised in a jungle. What has got fans buzzing about a possible return?

On August 23, Allen shared a sweeping landscape shot of the sun shining near the horizon from behind tree branches. The grass is rolling and yellow, the trees sparse but impressive, and the sky endless. Allen, who has been known to share photos from movie sets before, simply captioned the post, “Moved again.”

In response, some of his over 800k followers commented on the beauty of the picture or shared photos of their own local “paradise.” But one user inquired, “Filming Jungle 2 Jungle 2?” The film received a mixed reception twice over; the first time was the original French movie Little Indian, Big City upon which Jungle 2 Jungle is based. The American version earned a cult following later, but so far there is no confirmation of a sequel.

Allen has so far not given any word on returning to Jungle 2 Jungle, but he has been hard at work returning to other beloved ’90s titles. He visited his workshop in the North Pole for a new The Santa Clause series called The Santa Clauses, to be streamed on Disney+. Fans of the original holiday classic got to enjoy some photos from the set courtesy of Allen. The Santa Clauses is due out in the fall of 2022.

Allen famously was not cast as Buzz Lightyear in the recent animated movie Lightyear, but he has reunited with former Home Improvement co-star Richard Karn for More Power, which takes an up-close look in the latest power tools and electronics, with enough voltage to easily satisfy Tool Time Tim. The first two episodes dropped on June 29 and more have followed on a mostly weekly basis.