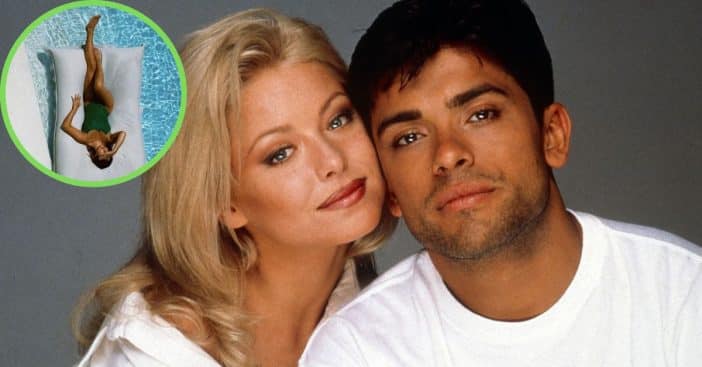 Lola Consuelos, the daughter of All My Children stars Kelly Ripa and Mark Consuelos, soaked up the sun in a stylish bathing suit last week and commemorated the relaxing moment with a photo. Lola, 21, is not one to frequently post on Instagram, with only five photosets shared to the platform.

This recent sunny picture went to her Stories, so it only stayed up for 24 hours. But that was enough time to soak up some rays and catch her 260k followers up on what’s been happening. In addition to some relaxation, Lola is celebrating the release of a new single she put together, out now on Spotify.

Late last week, Lola showed a photo of herself in a sleek green one-piece bathing suit that showed off her figure. The wide top-down view showed she was lounging on a floating white cushion with water from the infinity pool rippling around her, with a set of steps nearby. Yet another picture showed her actually on the steps with a sheer robe on, with nothing but sky and water behind her. That time, it seemed the bathing suit of choice saw Lola in a dark two-piece.

She also had “USE MY SOUND” linked, likely to her latest big project. Just what has she been up to? Lola is an aspiring musician who began her freshman year at New York University back in 2019 and it seems she’s been putting her skills to good use.

As of August 10, Lola has her first single out on the airwaves. It is called “Paranoia Silverlining” and features fellow artist JO JO. “The song is about the idea that sometimes your biggest fears are all in your head,” Lola explained of the song’s meaning. “I think a lot of people get paranoid, and the silver lining of it all is that there’s really nothing to be paranoid about.” It seems her professional and educational careers are supplementing one another, as Lola is studying music at NYU; her brother Mark pursued film at the same college. Though Ripa and Consuelos had to adjust to empty nest life, they’ve been supportive of Lola’s ambitions.

Dreaming of becoming a professional singer, Lola called composing “Paranoia Silverlining” a “super therapeutic process, adding, “I’ve always loved music and I’ve always loved singing. I think a lot of artists would understand that finding your sound is a really difficult thing, and this was a song that I felt like sounded like me finally. Once I wrote a song that resonated with what I wanted my sound to be, I knew I had to release it.”