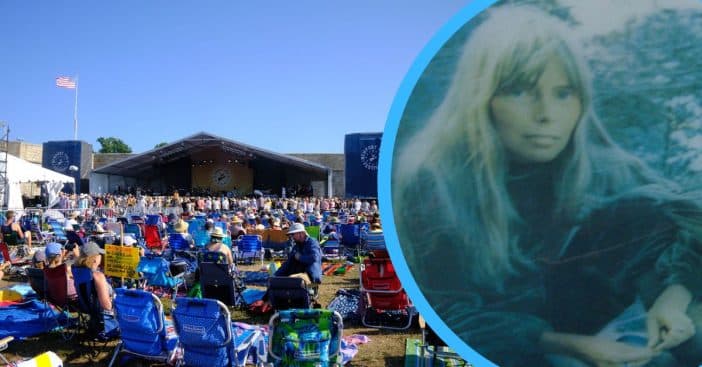 The last time Mitchell performed a full set there was in 1969. The event was full of surprises, as the crowd did not expect her to come out. Additionally, she’s battled the odds after fighting a brain aneurysm back in 2015. With the crowd cheering, Mitchell grew tearful. Here’s what happened that remarkable day.

The Newport Folk Festival is a yearly musical event highlighting folk artists as a variation of the Newport Jazz Festival. Based in Rhode Island, it began in 1959 and is something of a rite of passage for those in the folk genre. Traditionally, it rolls out the performance lineups over the year instead of all on one day and still leaves chances for total surprises regarding who will be playing at the event. Similarly, Mitchell was known for “Joni Jams,” which used to be held at her Los Angeles home. But Mitchell had stepped away from music after her 2015 brain aneurysm; the last time she performed was on her 55th birthday.

Today, she is 78 and the concept of Joni Jams was going strong at the Newport Folk Festival. Brandi Carlisle and Allison Russell were among the performers keeping the fun going. Carlisle said, “But how are we gonna have a Joni Jam without our queen? We’re not!” Per the festival’s tradition of surprise, the crowd was treated to Mitchell coming on stage to participate in the set lineup.

What this meant to fans and Mitchell

Mitchell was met with thunderous cheering when she took the stage. Ultimately, she participated in 13 songs for the set for the first time since ’69, joined by the ensemble for “Carey,” “Big Yellow Taxi,” and “Circle Game.” For however joyous her shocked fans were, she was feeling a wave of her own emotions and reportedly grew tearful. She asked, “Did the world just stop? Did everything that was wrong with it just go away?” It was 1969’s “Both Sides Now” that had Wynonna Judd crying tears of her own, as she was moved by the powerful return Mitchell made after a lot of hard work. After all, Judd shared, “Joni was the soundtrack of my childhood — she’s my hero — and Brandi invited me to come and be a witness to her incredible journey.”

“I’m learning,” Mitchell said of the work she’s put into becoming able to play again since her aneurysm. “I’m looking at videos that are on the net to see where I put my fingers, you know. It’s amazing what an aneurysm knocks out – how to get out of chair! You don’t know how to get out of a bed. You have to learn all these things by rote again. I was into water ballet as a kid, and I forgot how to do the breaststroke. Every time I tried it, I just about drowned, you know?. So, a lot of going back to infancy almost. You have to relearn everything.”

Click for next Article
Previous article: No One Refills Ice Bin Despite Having 21 Servers, Claims Texas Roadhouse Server
Next Post: Drew Barrymore Reminisces With Emotional, Pre-Separation Photo Of Her Parents