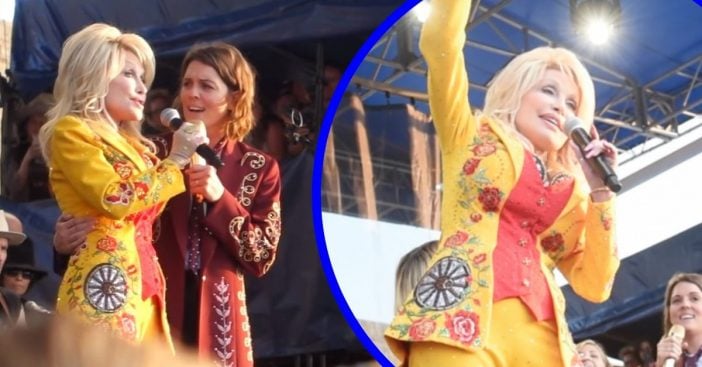 This year’s Newport Folk Festival, taking place in Newport, RI, highlights women in the industry for sure. The guest of honor at the 2019 festival was none other than country icon Dolly Parton. Groups and artists at the festival consist of Amanda Shires, Maren Morris, Natalie Hemby, and Brandi Carlile, country music group the Highwomen.

When Dolly Parton was introduced to the crowd, she said in classic Parton style, “Me and Rhode Island have a lot in common. We’re little, but we’re loud, and we do big things!”

The Newport Folk Festival was full of anecdotes and stunning renditions

Accompanying Parton was the incredible Linda Perry, who introduced Parton as an “incomparable unicorn legend.” Perry helps Parton lead into her 1991 ballad, “Eagle When She Flies.” Following the tune, the band begins to play “Just Because I’m a Woman” after an anecdote from Parton. She’s a great storyteller!

The story leading into “Just Because I’m a Woman” comes after Parton recalls her awkward wedding night with husband, Carl Dean. “When you boys want to get married, you want us women to be pure as snow… and sometimes we’re not!”

Parton reveals the real meaning behind one of her biggest hits

Parton and singer Brandi Carlile take the stage together for a rendition of the 1974 hit “I Will Always Love You.” Following that, Parton tells a story about the real woman behind her hit song “Jolene,” which she sang joined by the Highwomen. There were multiple reasons behind the hit, but Parton does confirm that there was a redheaded bank teller who would often flirt with her husband, Carl.

“I told him, ‘I know you work in [the] asphalt [business],” said Parton. “But it’ll be your ass and your fault’ if I leave!” Parton tells the audience in a story.

It was truly a setlist to remember, and Parton was easily the star of the show for the Newport Folk Festival. The show was billed as “♀♀♀♀: The Collaboration.” Take a look at the full setlist of acts below, provided by Rolling Stone.

Dolly Parton is set to star in the Hallmark channel’s Christmas at Dollywood! Check out all the details here.

Click for next Article
Previous article: Watch Pink And Her Daughter Willow Sing Together In Powerful Ballad About Dreams
Next Post: Kelly Ripa Shares Adorable Throwback Photo Of Herself In Pigtails And Bow