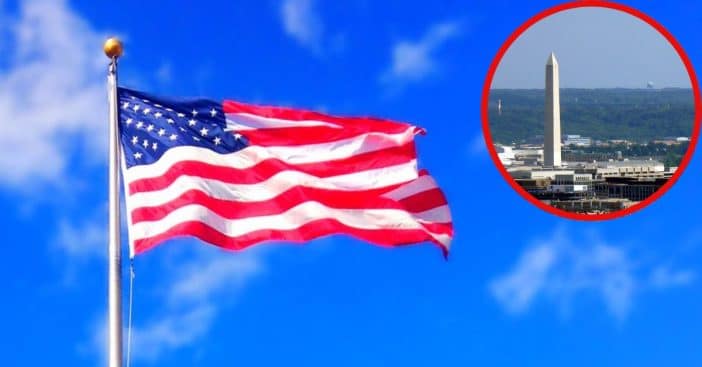 Washington D.C. Mayor Muriel Bowser directed her team to fly American flags with 51 stars along Pennsylvania Avenue. The move comes in time for Flag Day, June 14, which commemorates the adoption of the U.S. flag in 1777. This new version of the flag symbolizes the district’s potential acceptance as a state.

The topic of D.C. statehood is a complex one. It borders Virginia and Maryland. Does any one state house it? No, because Washington is a federal district – the only location with the status of federal district in the country. It houses over 700,000 residents but they are not represented in the House or Senate. The topic has been brought up again in time for the holiday.

On #FlagDay we raise the 51-star flag and remind the nation that the 705,000+ residents of Washington, DC, who pay the highest taxes per capita yet lack full voting representation, deserve statehood now!

It wasn’t a display of the biggest flag, but it certainly had the most stars. On Flag Day, the streets of Washington D.C. were adorned with American flags sparkling with 51 stars instead of the usual 50. Mayor Bowser shared a photo in a tweet that reads, “On #FlagDay we raise the 51-star flag and remind the nation that the 705,000+ residents of Washington, DC, who pay the highest taxes per capita yet lack full voting representation, deserve statehood now!”

It was President Woodrow Wilson who first declared June 14 Flag Day in 1916. That means the summer of 2022 marks the 106th official Flag Day in America. The design as Americans know it first came into circulation on July 4, 1960, after Hawaii became a state on August 21, 1959. D.C. is looking for a similar chance.

Could the flags get more stars?

Changing the design of the flag is not unheard of. After all, on that day in 1777, the Flag Resolution declared, “Resolved, That the flag of the thirteen United States be thirteen stripes, alternate red and white; that the union be thirteen stars, white in a blue field, representing a new constellation.” It collected 37 more stars over the years since then. But what about the change that would even cause the need to add a star in the first place: D.C. statehood?

The DC Admission Act, passed by House Democrats in April, would grant statehood to the district, and thus give its residents representation in Congress. But there is more to it than that, with plenty of back-and-forth and points of consideration. Republican legislators note that D.C. statehood would actually need to come through a Constitutional amendment, not legislation in Congress, due to its origins in Article 1, section 8, clause 17 of the Constitution. Washington could also be a deciding force in voting and passing laws, bringing representation to a population that is comparable to many of its neighbors.

Will the U.S. flag have 51 stars in the near future?

Click for next Article
Previous article: Martha Stewart Shares Which Grocery Store Items She Will Never Buy
Next Post: Inside The Feud Between John Wayne and Frank Sinatra